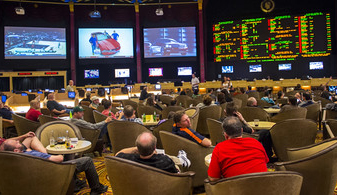 New Jersey may be flexing its muscle when it comes to sports betting success, but its results still pale in comparison to Nevada. The Silver State set another record for handle in 2019, the tenth consecutive record. The year also marked the second time Nevada surpassed $5 billion in handle.

New Jersey’s still fledgling sports betting business surpassed Nevada in handle in May, but in the end, Nevada set another record by growing its take by 6.2 percent to $5.3 billion.

The results marked the tenth straight annual handle record set in the state and the second time figures eclipsed the $5 billion mark, based historical figures from the University of Nevada Las Vegas.

Revenue for the full year also hit a new record at $329.1 million, up 9.3 percent from last year’s record, according to LegalSportsReport.com. December’s handle hit $571.1 million, while revenue exceeded $36.3 million.

Handle for all sports categories except for parlays rose year-over-year in 2019 while hold rose for all but basketball. Football fell short of the $2 billion handle mark, coming in at $1.9 billion. That number included a drop in Super Bowl betting for only the second time in 10 years.

Basketball followed next with $1.7 billion in handle, while baseball ranked a distant third at $1.1 billion. All other sports accounted for $594.8 million. Parlay handle surpassed $50.1 million.

Mostly good stuff. But could 2019 mark the last year Nevada will lead U.S. states in sports betting handle? New Jersey sports betting finished 2019 with $4.6 billion in handle, in spite of a market yet to mature.

Nevada appears ready to match other jurisdictions throughout the country in reporting its mobile wagering share. Even though mobile Nevada sports betting began in 2010, the state’s regulator has never separated out how much came from mobile.

That increasingly detailed reporting will provide a clearer picture of how Nevada compares to other states. The ballpark figure of nearly half suggests that the state’s onerous in-person registration and funding requirements hamper mobile potential.

Nevada sports betting app technology also lags behind what flourishes in the east. DraftKings co-founder Matt Kalish recently cited the in-person sign-up mandate as a primary reason the company has not launched its app in Nevada.