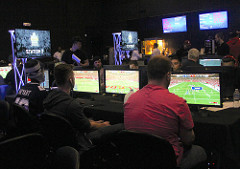 Nevada sports book operators will be allowed to offer betting on multiple eSports contests under plans by state regulators that will dramatically expand the industry’s presence in Las Vegas and beyond.

The change was announced by Karl Bennison, who heads the Enforcement Division of the Nevada Gaming Control Board.

As it stands currently, betting on only three eSports events is allowed since the Nevada Gaming Policy Committee, an advisory body to the Control Board and the Nevada Gaming Commission, cleared the industry for wagering last November.

Under the same rule, eSports are classified as “other events,” a category covering everything outside horse and greyhound racing and athletic events and includes propositions such as NBA Rookie of the Year or Cy Young awards or the winner of the World Series of Poker. As such sports books are required to obtain permission individually and in advance for each contest offered.

It’s expected the more liberalized scheme will afford books to offer possibly a year’s worth of competitions, basically treating the industry the same as NASCAR races or NFL and NBA games.

No timeline has been set yet for putting it into effect―and it comes with a couple of caveats: namely, that permissions will apply only if series are organized by single companies and run by operators that have passed muster with the Control Board.

This second point could prove key, as Bennison implied that regulators would be more comfortable if eSports had a governing body similar to the major professional and amateur sports leagues.

He cited the Esports Integrity Coalition as a “good example.”

“Not everyone is a part of ESIC,” he said, speaking at the Casino eSports Conference in Las Vegas earlier this month. “But at some point, say if you have something like ESIC oversight, it could be that you’re good to go (to offer regular bets). Now, that hasn’t happened yet. But it could be one way.”

Nevada’s lead in this area could pave the way for other U.S. states to consider similar reforms, observers say, particularly in states which have introduced or are weighing the legalization of real-money daily fantasy sports.