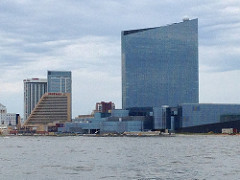 When the Hard Rock casino—formerly the Taj Mahal—and Ocean Resort—formerly Revel Atlantic City—re-open this summer on the Atlantic City Boardwalk, they will move to join New Jersey’s online gaming market.

Officials for the state Division of Gaming Enforcement confirmed to the Associated Press that both companies have applied for the licensing.

The UK gambling technology company GAN recently said in its annual report that has signed a multi-year agreement with AC Ocean Walk LLC, the owners of Ocean Resort to provide an online gaming platform. The company expects an online site to go live in the second half of 2018, according to the AP.

The report also said GAN will offer sports betting under the agreement if the U.S. Supreme Court rules in favor of New Jersey’s challenge to a federal sports betting ban.

Further, the company said it expects to offer online gambling in Pennsylvania when online gaming begins there. The company’s software is used at Parx Casino’s social gaming site.

Hard Rock International has not released any details of its online plans.

Online gambling brought in $245 million in New Jersey for 2017, up nearly 25 percent over the previous year. Online revenue now represents about 9 percent of casino revenue for Atlantic City, according to the AP.

In another story, Hard Rock has begun hiring ahead of its planned summer opening. The company began by holding a two-day career fair that focused on rehiring former Taj Mahal employees. The casino invited about 1,600 former Taj employees to the event and about 1,400 attended on the first day of the job fair, according to the AP.

However, despite the closing of five city casinos since 2014, labor experts are warning that Hard Rock might have trouble filling the about 3,000 open positions at the casino. Ocean Resort is also expected to need about 3,000 employees.

Though the city lost about 10,000 jobs due to the casino closings, many of those workers have left the area—some to take jobs at new casinos such as MGM National Harbor in Maryland. Other workers have also found new employment in different fields.

“Believe it or not, it’s going to be very difficult to fill those jobs,” Bob McDevitt, president of Unite Here Local 54, the city’s largest casino union told the Press of Atlantic City. “This is the tightest job market that I have seen. A lot of people pulled up their stakes and left. Also, young people are not staying around here. They don’t see a ton of opportunity here.”

It’s estimated that the city’s existing casinos already have about 1,000 unfilled positions available, the Press reported.

Angel To Devil For S