New BIA Secretary Gets to Work 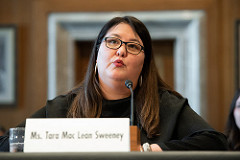 Sweeney’s first public action happened last week when she signed two documents that were published in the Federal Register. Both concerned gaming.

Sweeney, although a Native American, is relatively inexperienced when it comes to gaming since she comes from Alaska.

In one matter, she approved an extension of a Class III gaming compact between South Dakota and the Rosebud Sioux. The extension was needed because the two parties keep extending the compact without approving a new one. This has happened a dozen times since 2012.

Sweeney’s second action was to allow a Class III gaming compact between California and the Elk Valley Rancheria to go into effect by “deeming it approved” and publishing it in the Register. It thus has the force of law even though the state and the tribe have never agreed on it.

Sweeney is the first Assistant Secretary from the Last Frontier state and the first woman to hold the title for 20 years. She was confirmed by the Senate on June 28.

She commented, “I am honored to be able to serve Indian Country in this capacity,” adding, “My goal is to develop strong relationships with tribes, Alaska Native corporations, and Native Hawaiian organizations to work on innovative solutions for lifting up our communities.”