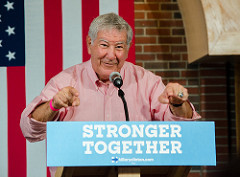 For the umpteenth year in a row New Hampshire veteran Senator Lou D’Allesandro has introduced a bill that would authorize two casinos in the Granite State. His bill was voted to the Senate Finance Committee by a vote of 13-10.

If the Committee approves it, which is not at all certain, it will head to the House, where it also faces an uncertain future.

“If we have to bring it back to the Senate floor and pass it again, that’s what we’ll do.”

The senator has seen his bill almost make it. The closest it ever came was in 2014, when it passed the Senate, but failed by one vote in the House, despite support from Governor Maggie Hassan.

The New Hampshire House is composed of 400 notoriously independent representatives, many of them very much against gambling.

D’Allesandro is optimistic. “I have reason to believe that if I can talk to them, and I’ll go to them one on one, we have a good chance,” he said. “There are no big outside lobbyists involved now. We are talking about something that’s totally New Hampshire. I have no ulterior motive but to do what I think is in the best interest of the state.”

Profits from the casinos would be shared among communities and the host county and would enable revenue sharing.

Opponents include the state Attorney General and Casino Free NH, which has racked up many successes opposing previous bills.

D’Allesandro thinks that the fact that surrounding states have legalized gaming should serve as an example to his state.

D’Allesandro notes that polls show New Hampshire voters support gaming. “How can 424 people in the Legislature deny the public what it wants, and deny it repeatedly?” he said.