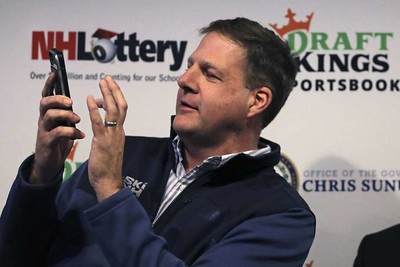 On December 30 the Granite State became the second in New England to offer sports betting to its residents. Governor Chris Sununu (l.) was the first to put his money down, wagering $82 on the Patriots to win the Super Bowl.

Granite Staters have the option of betting online and on mobile platforms through the New Hampshire Lottery.

On the first day, 6,000 players registered to play and placed bets totaling $250,000. According to the lottery, a lot of people from Massachusetts crossed the state line to wager in New Hampshire. The app is expected to go live by February at the latest, the governor predicted.

Lottery Executive Director Charlie McIntyre issued a statement saying, “Clearly there is strong consumer demand that will only grow as we market this new and exciting product.”

The state contracted with Boston-based DraftKings to operate sportsbooks, in contrast to Rhode Island, which runs its own program and has seen a much lower profit than was predicted. The contract is for six years. The state will get half of the sports betting revenue, most of which will be earmarked for education. The lottery estimates it will generate $7.5 by 2021 and double that two years later.