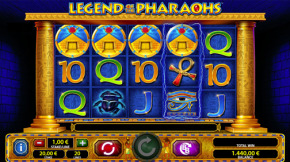 Get ready to answer the call of the wild when you join the wolf pack on its night hunt for big wins in Golden Wolves. In this five-reel Xtra Reward game, Action Stacked Symbols, mystery bonus wilds, and exciting free game spins through the reels over the backdrop of a snow-covered moonlit forest.

Golden Wolves is available in a 30-line configuration with extra bet. Denominations range from 1 cent to 10 cents. The primary game features special sets of Action Stacked Symbols for all reels, randomly replacing those positions with the same selected symbol at the start of each spin.

Randomly before or after any spin, a loud howl echoes out as the wolf pack races across the screen to scatter additional wild symbols on the reel strips for exciting payouts. On some occasions, the feature can even occur twice for one spin.

Any three or more gem symbols trigger up to 20 free games. The mystery wild feature can occur more frequently during the free games.

Legend of the Pharaohs
SG Interactive

Are you daring enough to take a spin on Legend of the Pharaohs? This five-reel, 20-line game features Big Bet, a free spins feature that is awarded for 3, 4 and 5 of a kind Pyramid icons, and exciting bonuses like the Pharaohs Bonus.

Free Spins are played on all five reels with 20 active win lines. The Colossal Symbol turns one chosen symbol colossal across reels 2, 3 and 4. Initially covering nine positions across three reels, the symbol remains Colossal until the end of the Free Spins Bonus or if another Bonus is awarded.

A Red Pyramid symbol stops on the reel during the Free Spins Bonus a re-trigger is offered. One symbol awards a number of free spins and one bonus; two symbols award two bonuses; and three awards three bonuses.

The Big Bet game uses a single set of reels. For each game, the player is awarded five spins. The game uses the same bet multipliers with the line bet fixed at 0.10. Free spin features are the same as the base game free spin.