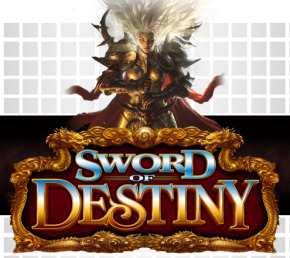 Sword of Destiny introduces SG Interactive’s epic fantasy to the iGaming space, where an evil knight rests on his throne, ruling over the game world with contempt for his surroundings and an undeniable arrogance.

The online game brings the dark, magical aesthetic of the original land-based game into portrait mode. Sword of Destiny lets players into a world of dynamic bonus rounds and incredible visuals.

Sword of Destiny features four base game features, a Free Games Bonus and a jackpot feature.

In the base game, WILD is wild for all symbols appearing in the base game ex­cept XZONE, which only appears on reels 2, 3, and 4, and BONUS. Only highest winner is paid per winning combination, and line pays are multiplied by the bet multiplier and must occur on adjacent reels, beginning with the leftmost reel.

Base game features are not available on a spin that triggers the Free Games Bonus or the Temple Tower Jackpot Fea­ture.

The Free Games Bonus is triggered by 3 scattered XZONE and award 8 free games and 2x total bet. During the bonus, every scattered XZONE awards 1 additional free spin. With each free game, a multiplier of 2-10x is applied to each win­ning combination.

For the Temple Tower Jackpot Feature, BONUS may appear on reels 1, 3, or 5 with any wagered spin. Three scattered BONUSES trigger the Temple Jackpot Feature, and a 16-step ladder appears on the screen with cash prizes and three jackpots. This feature is not available on a spin that triggers the Free Games Bonus.