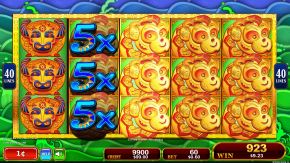 There are two objects of fascination for the shimmering gold monkey that’s featured in Konami Gaming, Inc.’s latest Xtra Reward release: multipliers and peaches. Wealthy Monkey is an exotic new five-reel game that invites you to join the cheerful character on his search for sparkling peach symbols and the multiplier-packed free games that may result.

Wealthy Monkey is available on several social sites in a 30-line configuration with extra bet, and is soon to arrive in New Jersey for real money gaming (RMG) in denominations ranging from 1 cent to 25 cents. The primary game features special sets of Action Stacked Symbols for all reels, randomly replacing those positions with the same selected symbol at the start of each spin.

Any three or more peach symbols trigger up to 30 free games. During the free game feature, wild monkey symbols can upgrade to 2x, 3x or 5x random multipliers when they achieve a winning combination.

Total multiplier wins can range from 2x to 45x. If more than one monkey symbol appears on a reel, then every monkey symbol on that reel included in a winning combination will upgrade to the same random multiplier. Additional free games can be won during the free game feature.