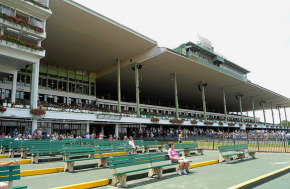 The tracks would be specifically exempted from state law banning “internet cafes” that offer real-money gambling.

The plan would be contingent on online gambling sites being willing to enter into the partnerships. Online gamblers can place a bet anywhere within the state’s borders, but supporters hope Atlantic City’s casinos and affiliated online sites will see the track facilities as a way of creating new business.

“It would bring more traffic into the racetracks, and they need it desperately,” said Democratic Assemblyman Ralph Caputo according to the Associated Press.

Supporters say they hope track patrons would place online casino bets between races. The track would be compensated by the casino for attracting new business under terms negotiated between the sites and the tracks.

“The casinos should realize that absolutely nothing will happen unless they agree to allow it through an agreement with a track,” Dennis Drazin, chairman and CEO of the Monmouth Park racetrack in Oceanport NJ told the wire service. “Nobody is forcing anything on them. This is really a win-win for the racing industry and the casino industry.”

Casino officials in the state have not weighed in on the plan. The bill also has to be approved by the New Jersey Senate, which has not scheduled a vote on the bill.

Online gambling has been averaging over $20 million a month in revenue this year and is on pace to bring in about $250 million for the year, according to the AP.

In another matter, the Senate has approved the appointment of James T. Plousis—a former Cape May County sheriff—as chairman of the state Casino Control Commission for a five-year term.

Plousis will replace Matthew Levinson, son of Atlantic County Executive Dennis Levinson, in the $141,000-a-year position. Dennis Levenson has charged that his son was not re-appointed by Governor Chris Christie as retribution for legal action the county has taken challenging the state’s payment in lieu of taxes plan for Atlantic City casinos. Atlantic County is seeking a larger percentage of those funds

Plousis said during his nomination hearing that the primary goal of the commission is “to uphold the integrity of the gaming industry,” and that he wants to work with local officials to resolve friction within the county, according to the Press of Atlantic City.

Also, a bill that would allow Atlantic City casinos and racetracks to remain open throughout a state government shutdown was approved by a state senate committee. An identical bill has been introduced in the assembly, but a committee hearing there has not been scheduled, according to the AP.

Current state law allows casinos to remain open for only seven days during a government shutdown.