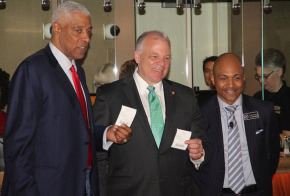 Murphy’s first bet was $20 on Germany to win the World Cup and he also placed a $20 bet that the New Jersey Devils would win the 2019 Stanley Cup.

NBA great Julius Erving made the first bet at the Borgata along with Senate President Steve Sweeney who said he bet $200 on the Green Bay Packers to win the NFL Super Bowl. Erving received a cheer from the hometown fans when he said he was betting on the Philadelphia Eagles to repeat as Super Bowl champions.

According to local reports, several hundred people turned out for both openings and both facilities saw long lines at betting windows.

Monmouth Park has always been expected to be the first in the state to offer sports betting, having already begun construction of a $2.5 million sports book complex through a partnership with William Hill. The facility now includes a William Hill sports bar and plans are for more expansions. The partnership dates back to 2013. In 2011 New Jersey voters first authorized sports betting in the state pending a challenge to the federal law.

Several Atlantic City casinos have announced they too will build sports books, but the Borgata was able to immediately use its race book—the only one operating at a city casino—to begin sports betting.

The sports book at Monmouth Park is being managed by William Hill, which actually built the sports book almost five years ago when the New Jersey legislature passed a bill decriminalizing sports betting, but was later blocked by a lawsuit by the professional leagues.

“We are excited to open for business at Monmouth Park,” said Joe Asher, CEO of William Hill US. “Obviously, it’s a big day for us. A lot of people have worked really hard for a long time to make today possible and I am grateful for their efforts.”

At the Borgata, IGT was selected by MGM Resorts to provide its end-to-end sports betting solution at the casino. Borgata uses IGT’s retail point-of-sale system, enabling in-casino patrons to place in-play and pre-match sports bets over the counter, effective today.

“Deployment of IGT’s sports betting solution at Borgata demonstrates that we are ready to deliver the products, technology, support and service to make retail and mobile sports betting a reality in any legalized state, today,” said Renato Ascoli, IGT CEO North America. “We’re very excited to extend our successful sports betting relationship with MGM Resorts to New Jersey and beyond.”

The openings became possible after Murphy signed a bill earlier in the week to regulate and tax sports betting. The bill was passed by the state legislature a week earlier and Monmouth Park had hoped to begin taking bets immediately.

In fact, New Jersey had to wait about a month after the U.S. Supreme Court struck down the federal Professional and Amateur Sports Protection Act, which had banned sports betting in all but four states. New Jersey spent about seven years challenging the act, spending an estimated $9 million in the process.

The victory before the high court, however, was more complete than the state had expected. The case represented the state’s second attempt to get around PASPA and actually centered around a state law allowing self-regulated sports books to operate at casinos and racetracks. When the court completely struck down PASPA, the legislature scrambled to get regulations in place.

The two sports books actually opened under temporary emergency regulations with the state’s Division of Gaming Enforcement expected to put permanent regulations in place in the coming months. The New Jersey Racing Commission has also approved temporary regulations for racetracks.

The delay allowed Delaware, which already had a parlay form off sports betting in place through its lottery, to be the first state to begin full have sports betting due to the high court’s decision.

Despite the delay, track officials were happy to finally begin sports betting.

The Meadowlands Makes its Move

The state is hoping that sports betting will be a much-needed shot in the arms for the state’s racetracks, which have been struggling for several years. Sports betting is now available at Monmouth Park and could begin at The Meadowlands racetrack and Freehold Raceway.

The Meadowlands made a major announcement a week before the openings saying it has partnered with Paddy Power Betfair to offer sports betting at the track. Paddy Power also teamed with Tioga Downs in New York State anticipating sports betting in that state.

Betfair US said it had reached “long-term agreements for retail and online/mobile sports betting” with the tracks, both of which are owned by New York real-estate developer Jeff Gural. Paddy Power Betfair is also teamed with Atlantic City’s Golden Nugget in online casino gambling.

The move comes after Betfair US recently announced a merger with daily fantasy sports operator FanDuel. Betfair US CEO Kip Levin told the website Legal Sports Report that it was “more than likely” that the company would offer sports betting in casinos and racetracks under the FanDuel brand.

The Meadowlands is expected to see a huge benefit from sports betting due to its proximity to New York City and also because both the NFL’s New York Giants and New York Jets play in the Meadowlands complex.

“The Meadowlands has potential to be among the best, if not the best, sports betting venues in the US,” Levin said in a press release. “Combining these premier facilities with the global sports betting prowess of Paddy Power Betfair is a great match and will enable us to bring an unparalleled sports betting experience to customers in the northeast.”

For Gural, who saw an attempt to bring full scale casino gambling to the complex shot down by New Jersey voters two years ago, sports betting will be a welcome addition to the track.

“Sports betting is a great opportunity for Meadowlands and Tioga Downs,” Gural said in the release. “We went through a diligent process and reviewed several options to provide customers with the best sports betting experience possible. In the end, Betfair’s world leading products and experience proved the best choice.”

A date for launching the sports book at the track was not announced, though Gural said he was eager to get started and hoped to have the sports book running by July, Legal Sports Report said.

Other announced partnerships for sports book operations in the state include Resorts casino in Atlantic City with another DFS giant, DraftKings, which recently announced it has applied for a state gaming license. Also, the soon-to-open Ocean Resort on Atlantic City’s Boardwalk has announced a partnership with William Hill—which is already partnered with Monmouth Park.

The Golden Nugget Atlantic City is also planning to offer sports betting by the NFL season and got a major concession on the bill in a last-minute adjustment before it was passed.

Golden Nugget owner Tilman Fertitta owns the NBA’s Houston Rockets. Under the first draft of the bill, the casino would have been banned form offering sports betting due to the affiliation, though could have begun taking bets if Fertitta sold his interest in the team within a year.

The clause would allow the Golden Nugget to operate a sports book, but the casino could not take bets on NBA games. Though the NBA is a popular choice for bettors, analysts say it is unlikely that Fertitta could have, or would have, sold the Rockets within a year.

Under the state’s bill, in-person betting would be taxed at 8.5 percent while online bets would be taxed at 13 percent. There’s also an additional 1.25 percent tax that goes to host municipalities and counties where a race track is located, or to the “Meet AC” program that promotes tourism in the Atlantic City area.

Online sports betting has not gone live in the state as the bill calls for an about 30-day delay before online betting can begin. The delay for online betting has also drawn some criticism, but Murphy told a local radio show the wait is needed for regulatory purposes.

“That’s to make sure we get the online piece of this exactly right in working with the enforcement side of this,” he said.

Murphy has anticipated the state will take in only about $13 million form sports betting in his current budget proposal. New Jersey’s fiscal year begins at the end of this month.

Also of note, several reports on the state’s sports betting law have speculated on the inclusion of a ban on eSports betting. The law also bans bets on high school sports and college sports involving New Jersey schools.

However, legislators have made no comment on a last-minute inclusion of a ban on eSports betting, even though several Atlantic City casinos have experimented with hosting eSports events. That has led to speculation by analysts that New Jersey legislators either didn’t want the law applying to the growing eSports field or are simply unfamiliar with eSports. Concerns also may have been raised that eSports attracts a lot of underage participants.

In a related story, Tropicana Atlantic City announced in a press release the launch of Tropicana Sports, a free-to-play experience where sports enthusiasts can test their knowledge to win real prizes including overnight hotel stays, complimentary meals and drinks, VIP parties and more.

“This innovative platform will give our players the thrills that come with rooting for their favorite professional sports teams and predicting the outcome of the games in a variety of fun contests,” said Tropicana Atlantic City General Manager Steve Callender. “We’re making the experience more fun by awarding prizes so the winners can enjoy hotel and dining amenities offered on property.”

Tropicana has not announced its plans for a real-money sports book.