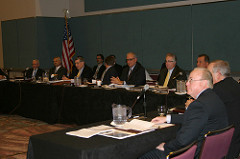 An audit by the state Office of Legislative Services and the Office of the State Auditor was the first state audit of the authority and differs from a statutorily required audit each year. The recently released audit criticized the authority for the way it tracks millions of casino reinvestment dollars spent on Miss America, beach concerts and The Walk outlets in Atlantic City.

“I want to make sure that the public understands that the Casino Reinvestment Development Authority is audited annually by one of the top independent accounting firms in the nation,” said Board Chairman Robert Mulcahy, reading from a prepared statement. “Those professional audits have resulted in unmodified clean opinions, confirming the authority’s design, implementation and maintenance of internal controls relevant to the preparation and fair presentation of financial statements. I think that’s very important in terms of things that have been said or done.”

The CRDA’s most recent internal audit was conducted by Mercadien Asset Management, of Hamilton Township, Mercer County, New Jersey. Other firms, including Wiss & Company LLP and Friedman LLP, have been used by the authority in prior years, according to the Press of Atlantic City.

The state audit, however, concluded that although CRDA’s financial transactions were relevant, the manner in which certain expenditures, contracts and agreements were executed were not “always reasonable” or an “effective and efficient use of its funds,” according to the Press.

The board had previously said it welcomed the state audit and will work with the state to correct any concerns.

Mulcahy, however, said the timing of the OLS report “did not allow for the inclusion of major, new financial control initiatives, which have been put in place.”

“The CRDA Board responded to the major legislative changes of 2011, including the absorption of the Atlantic City Convention Center and Boardwalk Hall, which was a complicated process requiring the adoption of new systems, which have now been implemented,” Mulcahy said. “The CRDA Board had to again deal with legislative changes in 2016 by redirecting the authority’s priorities and appropriately rightsizing and streamlining staff creating savings and efficiencies, including the $55 million that we have given to Atlantic City to pay for their bonds. While doing so it has maintained the investments, contributing to much of the new growth in Atlantic City.”

Mulcahy also noted that CRDA has put $1.9 billion into Atlantic City, adding, “I say that so that there is some perspective about what the agency has done for the area here.”

However, the report also comes as the authority is continuing to be criticized for financial support it gives the Miss America Organization. This year was the last year of a three-year, $12.5 million contract between the authority and the pageant. The contract provided an about $4 million subsidy to the pageant for holding the event in Atlantic City.

However, it’s appearing unlikely that CRDA will continue the subsidies. Both Atlantic City Mayor Frank Gilliam—who sits on the CRDA board—and Doherty have said that the subsidy is more than the CRDA can afford.

“I don’t believe that Miss America should be $4.5 million. I don’t think that we should pay that,” Gilliam told the Press. “I think that there’s a place for her if they’re willing to truly, in my opinion, reconfigure how the pageant operates and how the event is going to be.”

The state audit criticized the authority for not tracking how its money was spent by the Miss America Organization in previous contracts and for not doing an economic impact study on holding the pageant in the resort before entering into the recently expired contract.

However, the authority does intend to go back into negotiations with the pageant.

Still, when asked if CRDA would be comfortable allocating the amount of money it has in the past to bring Miss America back, Doherty said, “No,” according to the Press.

Part of the reason is a legislative change in the state that has diverted casino reinvestment funds from the authority to help pay down Atlantic City’s municipal debt until 2026.