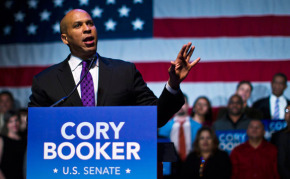 New Jersey’s U.S. congressional delegation sent a letter last week to U.S. Deputy Attorney General Rod Rosenstein, urging the Department of Justice to abandon the possibility of rescinding the 2011 DOJ opinion that cleared the way for legal online gaming, which currently thrives in the state.

The letter was in response to a November letter from Republican Senator Lindsey Graham of South Carolina and Democratic Senator Dianne Feinstein of California asking DOJ to rescind the opinion that the federal 1961 Wire Act applies only to sports betting, and does not prohibit online gambling. U.S. Attorney General Jeff Sessions said in his confirmation hearing that he planned to reassess the opinion.

Sessions has since recused himself from the issue, since his personal attorney in the ongoing DOJ probe into Russia’s meddling in the 2016 presidential election, Charles Cooper, had been a lobbyist for Sheldon Adelson’s Coalition to Stop Internet Gambling. Rosenstein took over for Sessions on all issues related to online gambling and the Wire Act.

The 2011 DOJ opinion cleared the way for online gaming in New Jersey, Delaware and Nevada, and the iGaming bill recently passed in Pennsylvania. In New Jersey, online gaming revenues proved to be one of the keys leading to the state’s first consecutive years of rising gaming revenues following nearly a decade of decline that saw five of Atlantic City’s 12 casinos close.

The letter to Rosenstein was signed by New Jersey’s two Democratic senators, Bob Menendez and Cory Booker, along with Republican Reps. Frank LoBiondo, Leonard Lance and Tom MacArthur, and Democrats Josh Gottheimer, Albio Sires, Bonnie Watson Coleman, Bill Pascrell Jr. and Donald Payne Jr. It addressed the Graham/Feinstein letter, which warned that legal online gaming “could usher in the most fundamental change in gambling in our lifetimes by turning every smart phone, tablet and personal computer in our country into a casino available 24 hours a day, seven days a week.”

Last week’s letter disputed that, noting that prohibition of iGaming has only strengthened operators of illegal, unregulated gaming sites. “Placing a blanket prohibition for online gambling would be an antiquated approach to a 21st century issue,” the letter said, “punishing states like New Jersey, which have invested in creating a safe and secure online gaming structure, while also permitting black market operators to put millions of Americans at risk.”