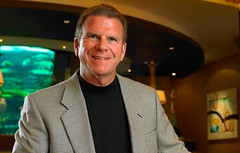 The New Jersey legislature has rescinded a regulation that barred gamblers from betting on the NBA at the Golden Nugget in Atlantic City because owner Tilman Fertitta (l.) also owns the Houston Rockets. The new law puts the state on the same plane as Nevada and Mississippi. Meanwhile, Fertitta predicts the addition of two new casinos in AC last year was “a huge mistake.”

Tilman Fertitta owns the Houston Rockets, one of few people wealthy enough to own a professional sports team. Fertitta also owns the Golden Nugget casinos in Atlantic City, Las Vegas and Biloxi, Mississippi, making him part of a rarefied fraternity.

Until September 13, Fertitta’s dual ownership of a sports team and a casino put his Atlantic City gaming hall at a disadvantage when it came to sports betting; a New Jersey regulation prohibited bettors from wagering on NBA games at the property.

The rationale for the prohibition, approved after the U.S. Supreme Court overturned a sports betting ban last year, was simple, if misguided. Fertitta’s ownership of the Rockets was viewed as a potential conflict of interest for patrons betting on the NBA.

The legislature took care of the problem this year by approving a law that permits betting on the NBA at the Golden Nugget except for games involving the Rockets. New Jersey Governor Phil Murphy signed the measure that brought New Jersey in line with the other two markets that house a Golden Nugget, with the lone restriction barring bets in Rocket games.

“We applaud this decision that allows all New Jersey sportsbooks to operate on a level playing field while maintaining the highest standards of player’s protection and sports integrity,” said Thomas Winter, senior vice president and general manager of online gaming at Landry’s/Golden Nugget. “We have one of the nicest and most friendly sportsbook lounges in Atlantic City and having a fully competitive offer will be very positive for us across the board.”

The issue has never been a problem in other states. “In Mississippi, our sportsbook has been extremely successful and we look forward to hosting many more guests in our Atlantic City sportsbook lounge this NBA season, offering a best in class betting experience to Golden Nugget patrons, in Atlantic City and online.”

The initial regulation was a rather “silly line item” meant to get sports betting up and running quickly, said analyst Dustin Gouker of Legal Sports Report. “Golden Nugget and Fertitta have booked the NBA in Las Vegas for a long time without incident, so I see no negative in letting the casino book it in New Jersey as well.”

How much of an impact did the New Jersey ban have?

“Golden Nugget has only made about $1 million in revenue from sports betting in 2019, it appears, so the bottom line impact is probably quite small. But it probably hurt its ability to attract new customers during NBA season in 2018-2019,” Gouker said.

According to Winter, it was worse than that. The NBA usually accounts for less than 15 percent of bets, he said. “But 50 percent to 60 percent of bettors bet on the NBA at some point. Based on our experience across multiple jurisdictions, and judging by the drop in mid-week visitation we’ve seen once the NBA season started last year, we estimate that our Atlantic City casino sportsbook lost at least 40 percent of its revenue potential during the past 12 months.”

A lower turnout in the sportsbook lounge can also impact other casino revenues, such as table games and food & beverage, Winter said.

Online, the impact was even greater, he added. “We couldn’t advertise our product without NBA betting and advertising is a must to sign up new players. We will now steadily ramp up our investments, across our product, user experience and marketing.”

Fertitta is not the only casino owner who also owns a pro team. Alex Meruelo, who owns the Sahara in Las Vegas, also owns the National Hockey League Arizona Coyotes. \Mohegan Sun owns the Connecticut Sun of the WNBA, and MGM Resorts owns the Las Vegas Aces in the same league. And the Maloof family, former owners of the Palms Resort in Las Vegas, own the Sacramento Kings of the NBA.

Any limitations on wagers regarding those teams is a league decision and not the NGCB’s, he said. “In the past there have been examples of the board placing conditions on licensees who had ownership in professional teams; however the board hasn’t recently required license conditions. We are not aware of any issues arising from allowing bettors to wager on games at a licensee’s sport book on a team which is also owned by the licensee.”

Fertitta told the Press of Atlantic City that allowing the AC property to offer betting on the NBA will be a huge get. “I think we’ll do well and will be a leader just like we are in internet gaming.”

In related news, the Golden Nugget owner lamented the re-opening of two casino hotels in Atlantic City, bringing the total to nine. He said there are too many properties to support a healthy market. Fertitta said the 2018 addition of Hard Rock Hotel & Casino Atlantic City and Ocean Casino Resort “affected everyone. You could say the market is going up and that we’ve added thousands of jobs, but now every other casino has had to lay off jobs, so I don’t even know how big the net gain is,” he said. “But now, none of the casinos have the cash flow that they did.”

Fertitta said the addition can bring back the bad old days of a decade ago when competition from Pennsylvania resulted in sagging profits and lack of investment in properties.

Over a two-year period, five Atlantic City casinos shuttered, including Revel and the Taj Mahal, reducing the number to seven and the results showed the ship righting itself. Revel and the Taj were reborn as Ocean Resort and Hard Rock.

“This is what happened to Atlantic City the first time, and it’s how the casinos got all run down. People didn’t have the money to keep (their properties) new and fresh by putting money back into it,” Fertitta told the Press. “I think it’s a huge mistake again. It’s a seven-casino market, and when it was seven casinos, everybody was putting money back into the properties. Now, they won’t.”

Golden Nugget weathered any financial struggles because of significant gains in online gaming revenue. In July and August, the casino reported the second-highest total gaming revenue (behind only Borgata Hotel Casino & Spa), spurred by a 63 percent growth year over year from internet gambling. Through August, Golden Nugget and its online partners have reported $108.5 million in revenue from online gaming, according to the state Division of Gaming Enforcement.

In Nevada, Another S