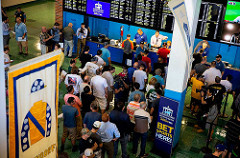 New Jersey’s three operating sports books saw a total handle of about $16.4 million in sports bets, taking in about $1.2 million in direct revenue—basically win—for a 17-day period in June.

Sports betting went live in the state on June 14. Total revenue was listed at about $3.5 million, but that includes bets on future events—which New Jersey does not count as direct revenue until the events are completed—and unredeemed winnings and adjustments. So the net revenue on sports betting can’t be determined on a month-to-month basis.

According to the report by the state Division of Gaming Enforcement, the $16.4 million in Total Handle included $15.4 million, or 94 percent related to completed events. About $10.1 million, or 66 percent of that was bet on MLB Baseball and $2.2 million, or 14 percent was bet on soccer and the World Cup.

Revenue by sports book broke down as $2,279,166 for Monmouth Park, $986,831 for Borgata and $192,671 for Ocean Resort. Again, the figures represent total revenue included future events and unclaimed tickets.

Not included in the report is the 1.25-percent that goes to county and municipal governments where tracks are located. For casinos, the fee goes to a fund to promote Atlantic City.

Monmouth Park had a winning percentage on sports wagering of 11.8 percent, which equates to revenues of $967,403.

“We are extremely pleased with our numbers,’’ Dennis Drazin, president and CEO of Darby Development LLC, which operates Monmouth Park told the paper. “We think they show there is a huge appetite for sports betting. To be generating these numbers early, and it’s not even football season yet, speaks enormously of the potential for when football season comes around. So we’re thrilled by the early numbers.’’

In a possible indication that sports betting is also helping the track’s racing wagering, on nine weekend/holiday racing dates between June 14 and July 12, Monmouth Park’s on-track handle averaged $399,589, up 3.4 percent over the same dates a year ago, the Press reported.

The sports book operations at Borgata and even for two days at Ocean resort also helped Atlantic City casinos for the month.

According to an analysis by the Associated Press, the Borgata had the best June in its 15-year history, winning $65.8 million from gamblers, more than twice the amount won by its nearest competitors in Atlantic City.

The city’s two newest casinos Hard Rock and Ocean Resort started soft-play gambling, a test with real money but for only a small group of guests, three days before their June 28 openings. Hard Rock won $4.1 million in that period, while Ocean Resort won $3 million, the AP said.

Meanwhile, a fourth sports book at the Meadowlands Racetrack was scheduled to open July 14. The track is opening the FanDuel Sportsbook at Victory Sports Bar & Club.

Due to the close proximity of the Meadowlands to New York City—as well as being where the New York Jets and Giants NFL teams play—the facility is expected to be the busiest sports book in the state.

“When you get to the metropolitan New York area anything could happen,” track owner Jeff Gural recently told reporters. “We’ll have to wait and see how it plays out.”

The track is partnered with Paddy Power Betfair to offer sports betting and officials from the bookmaker have confirmed they will use FanDuel’s branding for the facility.

Paddy Power recently announced it had completed its acquisition of FanDuel and that Paddy Power Betfair’s U.S. operations will now be known as FanDuel Group.

The company will be run by FanDuel CEO Matt King with Betfair US CEO Kip Levin taking over as president and COO of FanDuel Group. Levin will also remain CEO of online horse betting operation TVG.

The operations of the FanDuel Group, which include the daily fantasy sports operation, TVG, Betfair online casino in New Jersey and DRAFT fantasy sports, boasts a customer database of 8 million across 45 states and $265 million in annual revenue.

Also on the horizon could be a sports book operation at the Hard Rock casino in Atlantic City, which has reportedly signed a deal with European operator Bet365. Neither company, however, has confirmed the deal publicly, but the deal was confirmed in regulatory paper work.

Many analysts feel that the partnership with Bet365—an online operator—is likely a deal allowing the company to operate its own online brand in the state. Online gambling sites must partner with Atlantic City casinos in New Jersey.

It’s still unclear if Hard Rock will be able to open a live sports book at its property. Hard Rock has a stadium naming rights deal with the NFL in Miami, but it is unclear if restrictions in that deal would block the casino from offering a sports book or at least betting on NFL contests.

Finally, technically casinos and racetracks were allowed to begin online sports betting on July 11, but so far, no announcements of any online sites have been made. The state has also not announced that any potential sites have received regulatory approval.