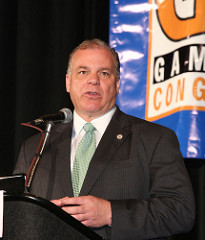 New Jersey Senate President Stephen Sweeny has launched another battle with billionaire and Atlantic City casino owner Carl Icahn over his handling of labor matters in the resort.

Sweeney wants the state Casino Reinvestment Development Authority to deny a $5.6 million payment in reinvestment funds to offset a $13.2 million demolition of a hotel tower at Icahn’s closed Trump Plaza property. The authority has already given a preliminary approval for the payment.

Sweeney charged that Icahn has treated casino employees poorly in the resort, especially after a long battle with city unions that led to the closing and eventual sale of the Trump Taj Mahal, which Icahn acquired with the Plaza out of bankruptcy—though the Plaza was already closed when Icahn took over.

Sweeney called on the agency to reject the payment to Icahn, saying he has “an antagonistic record of treating employees.”

“Carl Icahn is no friend to Atlantic City and he has a record of harsh treatment of working people,” Sweeney said according to the Associated Press. “I have serious questions about allowing him to take $5.6 million in funds intended to promote economic development for the city and its residents and instead use the money for his own property. He has a track record as a profiteer who denies fair pay and benefits to workers.”

Icahn and Sweeney got into a running battle last year over the Taj Mahal, which was closed in October 2016. Sweeney authored a bill that would have stopped Icahn from re-opening the casino after a shutdown for five years in an attempt to block a possible union busting tactic. The bill was eventually vetoed by Governor Chris Christie.

As for the Trump Plaza, the authority gave preliminary approval to the demolition plan saying that the property sits on one of the most valuable Boardwalk properties in the resort and a demolition could help spur reinvestment in the site.