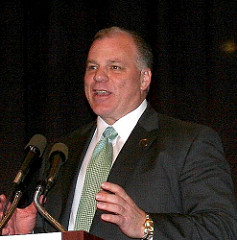 Major League Baseball and the NBA, among other leagues, began lobbying the state’s lawmakers to include an integrity fee in the legislation. Former New York Met and New York Yankee Al Leiter, a New Jersey native, joined representatives of the two leagues and the Professional Golfers Association to lobby lawmakers for the leagues to have a cut of the revenue once sports betting begins, according to a report by NJ Advance Media.

The two leagues were principals in opposing the state’s plans for sports betting in its nearly seven-year legal battle to have the Professional and Amateur Sports Protection Act overturned. The act banned sports betting in all but four states. The state eventually won the battle when the U.S. Supreme Court overturned the law last month.

Technically, the state won a challenge to protect its current law which allows self-regulated sports betting at casinos and racetracks. However, the legislature has blocked attempts to start sports betting until it can adopt a new regulatory framework.

The leagues are now lobbying for a 1 percent tax on sports betting to be used to protect the integrity of the sports.

Leitter told reporters then there’s “got to be some regulation and some people watching to make sure that everything is done properly and maintain the integrity of the respective sport.”

However, the integrity tax is being opposed by the state’s powerful Senate President Stephen Sweeney who has called the fee “extortion” and urged all states considering sports betting not to include the fee.

The leagues said they want to form a coalition with sports betting operators and states to make sure proper data is shared and consumer protections are in place.

“We continue to engage with legislators to discuss a partnership with New Jersey that contains strong protections that safeguard our sport and will help ensure the success of sport betting in New Jersey,” Major League Baseball said in a press statement.

Also, the New Jersey Thoroughbred Horsemen’s Association filed a legal action against the four major pro sports leagues and the NCAA, claiming the leagues cost Monmouth Park Racetrack in Oceanport N.J. more than $139 million in lost revenue by challenging the state’s sports betting law. The track is also planning a lawsuit against the leagues.

According to the Associated Press, the association’s legal action claims the leagues acted in bad faith when they sought a restraining order in 2014 to block Monmouth Park from offering sports betting. It charges that the leagues were actively promoting and endorsing daily fantasy sports companies while seeking to block sports betting in the state.

The association’s claims Monmouth Park would have made $139 million in revenue from sports betting between November 2014, when a judge imposed a permanent injunction barring the state from offering sports betting, and this month’s Supreme Court ruling.

The suit seeks payment of a $3.4 million bond the leagues posted in 2014 to secure any loss the horsemen’s association might suffer during the time the temporary restraining order was in effect and also seeks a hearing to determine the total damages owed by the leagues, the AP report said.

Attorneys for the NFL and other sports leagues, however, claim the filings by the track and association are “meritless, if not frivolous” in an answer they filed in federal court, according to the Asbury Park Press.

Meanwhile, the Ocean Resort casino in Atlantic City—formerly the Revel casino—announced it has signed a deal with William Hill to run its sports book. William Hill is also partnered with Monmouth Park racetrack in Oceanport N.J., which is expected to offer sports betting the first day it is allowed under the new state law.

The casino said it has partnered with the bookmaker to operate a 7,500-square-foot betting facility on its main gambling floor. Casino officials also said they are planning to offer private sports bet suites for major events.

“We are very excited to be a part of Ocean Resort Casino, and to have a presence on the Atlantic City boardwalk,” Joe Asher, CEO of William Hill US, said in a press statement. “We have had great success working with Ocean’s senior management in Las Vegas, and we are excited to have the chance to do so in Atlantic City at what will be the best sports book in town.”

Jordan Deifik, property principal of Ocean Resort Casino, told the local Press of Atlantic City that the sports book would be ready for the casino’s scheduled June 28 opening, pending regulatory and license approvals.

Also, daily fantasy sports giant DraftKings has begun advertising that it will introduce its own sports betting product to New Jersey, though the ads set no date for when it will begin. The ads are mostly seen on billboards along the major routes to Atlantic City, according to published reports and promise that sports betting is coming soon to DraftKings.