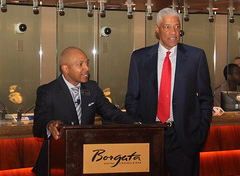 There’s a clear advantage to being the first kid with a new toy. New Jersey was the first to jump into legal sports betting after last year’s Supreme Court decision overturning PAPSA—the result of a lawsuit filed by the state, by the way. As the industry nears the end of its first full year, Jersey still holds the home court advantage. Borgata was the first to launch a sports book when basketball great Julius Erving was welcomed by Borgata President Marcus Glover (l.).

New Jersey was the first state in the U.S. to launch legal sports betting. Borgata, Ocean Resort, and Monmouth Park were first with retail betting onsite in June of last year. Online betting launched in August and September. Next month will provide the first year-over-year results.

How long will New Jersey’s advantage last? That remains to be seen. By the end of the year, all of Pennsylvania’s casinos should be operating sportsbooks, both online and in the casinos. Could New York be far behind?

But for now, sports wagering in the Garden State is healthy and growing.

“Consumers now have access to high-quality, state-of-the-start legal sportsbooks. New Jersey’s long legal battle was worth it, and the arrow is pointing up,”according to Brett Smiley, editor for industry publications SportsHandle.com and USBets.com.

The combined onsite and online handle topped $251.4 million in July and has exceeded $2.2 billion for the year, with online wagering the overwhelming favorite of bettors by more than 80 percent.

The total betting handle in May in New Jersey actually surpassed that of Nevada’s, $318.9 million to $317.3 million, according to Smiley.

“Just one year into the opening of a legal market, that’s very impressive,” he said.

New Jersey allows each licensed property to use up to three online brands. Caesars has Caesars and Caesars Interactive, while Resorts has Resorts and Resorts Digital, for example. With remote registration for all these sportsbooks available throughout the state, New Jersey has produced a robust, regulated market that is being viewed around the country as a model, Smiley said.

“Peaks and valleys in sports betting handle correlates for the most part with the pro seasons,” said Rummy Pandit, executive director of the Lloyd D. Levenson Institute of Gaming, Hospitality & Tourism at Stockton University.

All three of the top sports are in play between September and June, but baseball only is operating come July and August. “When there’s no football or basketball, there’s always a lull and numbers dip. Those are the most heavily bet sports in the U.S. Plus, people vacation in the summer,” Pandit told GGB News.

A relative decline in sports betting handle from May through July and into August should be expected as fewer, and less popular games are played. “This reduces the opportunity for wagering and hence the overall handle,” Pandit said.

That contention is borne out by state Division of Gaming Enforcement numbers, which show the handle dropped from $318.9 million in May to $273.2 million in June and $251.4 million last month.

“Come September, when the football season starts, and October, when football, baseball, basketball even hockey overlap, we should expect to see significant increases in sports betting handle simply due to the increased number of games and opportunities to wager,” Pandit said. “The numbers are going to spike again.”

A good chunk of the bets at the FanDuel Sportsbook at Meadowlands are coming from New Yorkers; the racetrack is only eight miles away from New York City.

“Anecdotally, there’s a good number of New Yorkers and Pennsylvanians crossing borders to get down a bet online,” Smiley said. “As of July, sports betting is now legal and operational in New York, but only in person at brick-and-mortar properties which include four upstate commercial casinos and tribal casinos, most of which are in remote parts of the state.”

Pennsylvania’s online and retail market is live now too, so expect some of that clientele getting siphoned away from New Jersey. “But I expect in year two, New Jersey’s market will nevertheless grow as word spreads about the availability of safe and quality sportsbooks, by word of mouth and large marketing spends on radio, online and otherwise,” Smiley said.

New recreational bettors will continue to join in, too. “I think sometime this football season we’re going to see the betting handle approach $500 million in a month, which is what we’ve seen in Nevada,” he added. “In other words, momentum is only growing.”

Game of the Week: Da