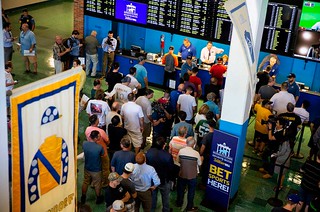 New Jersey’s aggressive approach to sports betting since last year has propelled the state to exceed Nevada in wagers for the third time in four months. (Sports book at Monmouth Park at left.) In August, New Jersey took in $293.50 in bets compared to $288 million in Nevada. In the coming months, Pennsylvania may overtake both states.

For the third time in four months, Nevada sports betting ceded its crown to New Jersey, this time in August. Licensed sportsbooks in Nevada saw close to $288 million in total wagers for the month, up about 16 percent from August last year, according to Legal Sports Report. New Jersey took in $293.5 million in wagers during the month.

Nevada operators won $18.7 million compared to $12.6 million last August, based on data from the Nevada Gaming Control Board.

Nationwide, the total handle across states with legal sports betting came close to $11 billion since the start of expanded wagering last June.

In Nevada, football betting accounted for more than two-thirds of the reported revenue. Much of that appears to come from NCAA and NFL futures wagers, as MLB handle still outpaced football more than two-to-one.

New Jersey policymakers established a new gold standard by installing a framework that fosters competition and innovation. Little more than a year since the launch sports betting in New Jersey is the largest in the country.

Pennsylvania is now online, threatening to take some of that traffic from neighboring New Jersey. In just their fourth month of mobile operations, the small group of online sportsbooks pushed a sports betting handle to $100 million in August. According to Legal Sports Report, Pennsylvania could be the largest market by the time Super Bowl or March Madness arrives.

It remains to be seen whether this represents a temporary overtake or an underlying shift in the long-term balance of power. Although Nevada still has what amounts to a regional monopoly on sports betting in the West, that balance is very much in flux in the eastern U.S.