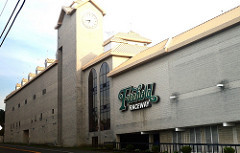 Freehold Raceway in New Jersey will finally be jumping on the sports betting wagon at some point in 2019, track officials said.

New Jersey’s sports betting law allows both live sportsbooks at its racetracks as well as partnerships between the tracks and online sports books. Of the three operating tracks in the state, Monmouth Park in Oceanport New Jersey was the first facility in the state to open a sportsbook in June.

Freehold Raceway, however, was conspicuously silent on its plans to offer sports betting. Now, however, a report has surfaced that the track has been negotiating with gambling firms.

“We are in negotiations with vendors for both retail and online, and we hope to have a decision by the end of the month,” Christopher McErlean, a longtime vice president at Penn National—which co-owns the track along with Greenwood Racing—told NJ Online Gambling.

McErlean said the track is hoping one operator can run both the brick-and-mortar and online operations. He also said the track hopes to make a deal by the end of the year, but said the track isn’t rushing to be up and ready by the NFL playoffs. Any potential deal would still require licensing and the physical building of a facility at the nearly 200-year-old track, he told the website.

“We’ve been able to see how the landscape has lined up in New Jersey, and there is some advantage to a more measured approach,” McErlean said. “This is about playing the long game. New Jersey is turning into a very good marketplace, and I think our location is very well-positioned.”

Since opening in June, New Jersey’s various sportsbooks are closing in on $1 billion in handle.

“There is a lot of interest online, and competing there is expensive, but the numbers overall are solid,” McErlean said.