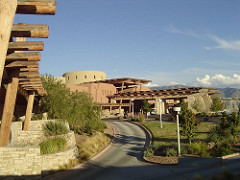 The first week of sportsbook in New Mexico at the Santa Ana Star Casino Hotel is in the can. It began on October 16 and ended in the red. And the state lottery is about the enter the game, as well.

USBookmaking is running the operation for the Santa Ana Star and the Pueblo of Santa Ana, that owns the casino. Vic Salerno of the company commented on the first week: “We lost like most people did this past week,” he said. “That shows we’re easy, and people will come back. I love it. If they lost, they might never come back.”

Salerno is a longtime, one might even say legendary bookmaker, who started in a small storefront in downtown Las Vegas. At one time he operated 125 sports books in the state. In 2015 he was inducted into the Gaming Hall of Fame.

He told CDC Gaming Reports, “There were thousands of people that were making wagers. It was beyond my expectations and were busy from the day we started. They don’t want the amount of handle out there now. They have a competitive edge, and don’t want to let everybody know.”

Remarking on the amount that the casino lost in the first week, Salerno quipped, “It’s a big casino, and it’s not a big loss for them. They probably lose that on a couple of blackjack hands.”

New Mexico become the sixth state to offer sports betting, joining Nevada, Delaware, New Jersey, Mississippi and West Virginia. It is more accurate to say that the tribe operates sports betting. The state has not legalized the activity.

Meanwhile, the New Mexico Lottery board of directors recently voted unanimously move forward with a game tied to the outcome of sporting events, partially in an effort to attract younger players. Lottery Chief Executive Officer David Barden said the game is expected to go on sale in four to six months. The game will involve a parlay-like wager requiring players to correctly choose the possible outcomes of at least three sporting events. “It’s not your grandmother’s lottery game,” Barden said.

The lottery’s sports game will generate $30 million a year, with $9 million directed to the lottery funded tuition-assistance program for college students, Barden said.

The game will be operated by Intralot, which operates Powerball, Roadrunner Cash and other games for the New Mexico Lottery. Intralot Chief Executive Officer Antonios Kerastaris said the New Mexico Lottery is the first in the U.S. to authorize a sports game to be available at all its retail outlets. He said Delaware has a lottery sports game but it’s only offered at limited locations.

Kerastaris said by requiring players to be correct on all picks and limiting the number of possible outcomes to choose from, Intralot can guarantee the level of payout.

Lottery Board Chair Dan Salzwedel noted, “This a great step forward for the lottery.” Salzwedel said the sports game will be similar to some of the pick-’em numbers games that the lottery now operates.

State lawmakers already have questioned whether lottery officials have the legal authority to offer a sports game. But lottery attorneys advised the board that it does have the authority to operate the sports game under the same provision in state law allowing it to operate numbers games.

Guy Clark, chairman of Stop Predatory Gambling New Mexico, said the lottery does need specific authorization from the legislature to run the sports game. He said the state, according to tribal gaming compacts, agrees to limit off-reservation gaming in exchange for a share of tribes’ slots revenue. The compacts allow a state lottery but contain no language about what lottery games may be offered.

The compacts allow tribes to offer any type of Class III gaming, which, according to federal regulations, includes sports betting as well as casino-style games.