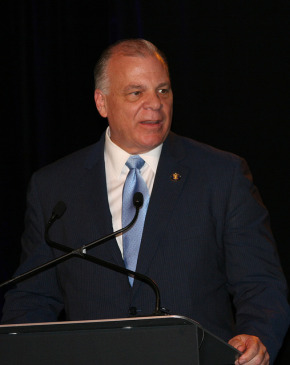 New Jersey State Senate President Stephen Sweeney has said that he doesn’t think supporters of expanding casinos in the state outside of Atlantic City will make a push for a new referendum in 2018 or 2019—covering his new term as Senate president.

“I don’t see it anytime soon, if ever,” he told the Associated Press.

Voters in 2016 overwhelmingly defeated a referendum to allow two casinos to be built in North Jersey. The referendum lacked specifics, but sites at the Meadowland and in Jersey City were considered the leading contenders. Nearly 80 percent of voters opposed the plan.

Under state law, supporters of the plan could put a new referendum before voters as early as 2018.

“I don’t see any way it comes back,” Sweeney told reporters. “It was crushed.”

New Jersey’s incoming Governor Phil Murphy has said he favors building casinos in Northern New Jersey, but referendums must originate in the legislature.

However, Jeff Gural, the owner of the Meadowlands Racetrack—a key site for a proposed casino—said he is prepared to wait five years or more before asking voters again.

“I don’t want them to put this on the ballot again until we know it’s going to win,” he told the AP. “If it loses again, it will never happen.”

Gural wants to wait New York state moves on plans to allow three casinos in the southern part of the state. That could take up to five years, he said.

“However long I have to wait, I’ll wait,” he said. “As soon as New York opens the three downstate casinos, the argument will no longer be about saving Atlantic City. New York and New Jersey will need revenue after this federal tax bill passes, and the one thing a Meadowlands casino would do is send $500 million a year to the state.”

Gural has partnered Hard Rock International on the Meadowlands casino project. Hard Rock is currently renovating the former Trump Taj Mahal in Atlantic City and plans to re-open it in the summer.

Gural also said any new referendum should not include aid for Atlantic City, which he said is “is doing fine on its own.”

That’s a marked change from the previous referendum, which included a provision that revenue from the new casinos would be targeted to aid the struggling resort. Opponents of the referendum argued that new competition would hurt Atlantic City’s remaining casinos.

However, profits are up at the city’s seven remaining casinos in 2017 and the market appears to have stabilized. Sweeney also noted that Atlantic City’s casino market has been recovering, however, that also means the need for more casinos in the state to help the resort has become less urgent, he said.

Frank Gilliam Jr., a Democrat who will take over as Atlantic City’s new mayor on Jan. 1, called the news “an early Christmas present.”

“That’s music to my ears,” he told the wire service. “As an incoming mayor, to know we won’t have to worry about having two sets of casinos at opposite ends of the state for at least five years gives me a greater opportunity to have a strong relationship with the casino industry.”