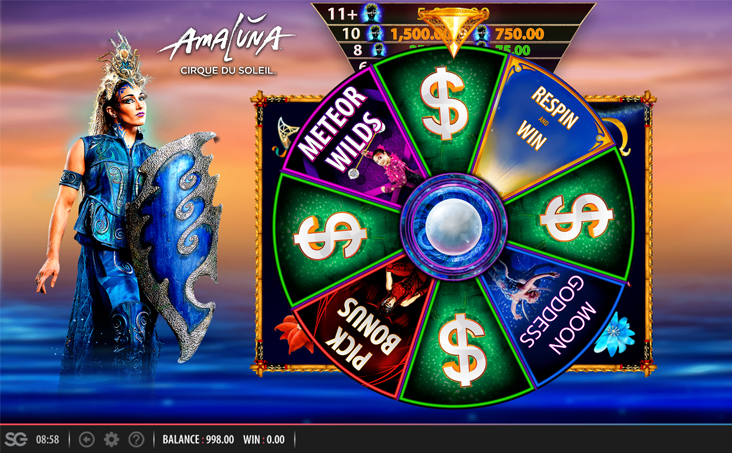 This game from SG Digital is based on Cirque du Soleil’s 2012 hit show Amaluna, which itself is loosely based on Shakespeare’s The Tempest. The base game is five-by-four (five reels four symbols per reel), 40-line slot.

The game includes a primary-game bonus and three different bonus events won through a triggered wheel spin. During the primary game, any spin that does not trigger the wheel bonus may award the “Mystery Wild Feature.” This randomly transforms four to 10 positions on the wheel into wild symbols.

Three scattered “Bonus” symbols trigger the Wheel Bonus Feature. On spins where two of the bonus symbols land, the game has a random feature where a third symbol will appear after the spin, triggering the bonus wheel. The wheel spins to a cash award, a “Respin and Win” feature, one of two free games features or a pick bonus.

If the spin lands on the cash symbol, it triggers a second wheel spin, on the “Cash Wheel,” for an award ranging from five to 60 times the total bet. (The amounts on the wheel change according to the triggering wager.) If it lands on “Respin and Win, a cash prize of five to 125 times the total bet is awarded, and a feature-only bonus wheel spins to land on one of three other bonus events, “Moon Goddess Free Games,” “Meteor Wilds Free Games” or the “Pick Bonus Feature.”

Moon Goddess free games consist of seven free spins, with a special moon symbol that substitutes for all other symbols. It appears on the three middle reels. Each moon symbol randomly awards up to three additional free spins, an increase in the win multiplier up to 3X, or a cash award from five to 62.5 times the total bet. The multipliers combine in the free spins to increase to a potential maximum 10X.

In the Pick Bonus 12 feathers appear on the screen, and the player picks to accumulate cash awards. With each pick, the player receives a “Level Up” or “Collect” message. Level Up increases a multiplier a random amount—up to 8X the total bet for the first level, up to 15X for the second, up to 30X for the third and up to 50X for Level 4. The first pick is guaranteed to reveal a Level Up. 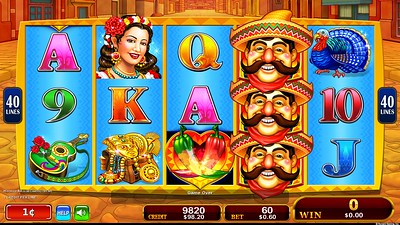 This game takes one of Konami’s most popular titles online. The base game is a five-reel slot available in line configurations ranging from 15 to 40 lines. The game reprises the male and female Mexican characters from the casino game in a colorful fiesta theme. The Mexican man, appearing on the middle three reels, is wild. The primary game features Konami’ trademark “Action Stacked Symbols,” which cluster symbols on two or more reels for large wins.

A primary game “Fade Away Feature” is triggered if card symbols A, K, Q, J, 10 and 9 appear on the game screen. If this happens, the poker symbols disappear and are replaced with higher-paying picture symbols, and the win is re-evaluated.

Any three, four or five Chili symbols trigger 10, 12 or 25 free games, respectively. A new set of free spins can be triggered within the free games, and the Fade Away feature occurs frequently during the free spins.

Looking for your next favorite online slot? Just follow the Slotlight Spotlight at ResortsCasino.com. Play selected online slots for a chance at big prizes. Your next big win could be just a spin away.

Do You Speak Slots?

Betting on Golf: The

Could Cam Newton Be