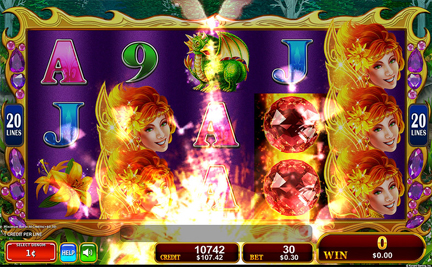 Looking for some slot action? Feel like trying something new? Check out these two new online slot games from game masters Konami Gaming and Everi.

This colorful Asian-style game is centered around a primary-game feature that adds wild symbols to the reels for big wins. Dragon’s Law Twin Fever features two dragons that appear to initiate this feature on random spins.

The base game is a five-reel slot available to gaming sites in configurations of 20, 30 or 40 paylines. The most common version of the game is a 20-line setup. It features Konami’s popular “Action Stacked Symbols,” which are symbols that appear clustered on adjacent reels to return big wins.

In the random Dragon’s Law Feature, the twin dragons appear on the screen, and travel a path through the reel array, placing star and ball symbols on reel spots. If a star and reel symbol stop at the same position, they will each change to a “Mark and Star” symbol, which substitutes for other symbols in winning combinations.

Wild symbols appear on reels 2, 3, 4 and 5 during the base game. During the Dragon’s Law Feature, wilds appear on all five reels.

Any three, four or five ball symbols on the reels trigger eight, 12 or 20 free games, respectively. The Dragon’s Law Feature occurs frequently during the free games, and the free-games round can be retriggered during the feature for additional free spins.

Here’s another game choice from Everi that taps into the preferences of slot traditionalists, with a classic three-reel game including all the familiar reel symbols diehard mechanical reel-spinners love—bars, cherries and multiple “7” combinations.

One Double Cherry symbol in a winning combination doubles the payoff; two symbols in a win multiplies the pay by four. Three wild symbols return the game’s top jackpot, set at $5,000 or $10,000 depending on the iGaming site.

GoldenNuggetCasino.com will match your first deposit, dollar for dollar, up to $1,000. For a limited time, with an additional $30 deposit, get 200 Free Spins on the brand-new slot, 88 Fortunes Megaways.