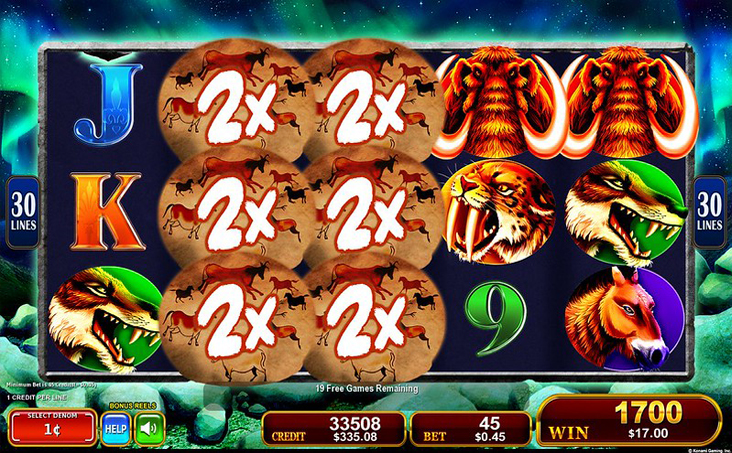 How are you fixed for online slots? Want to try something new? Konami offers a prehistoric party, while Everi continues a hot streak with its new game, Smokin’ 777s.

This game employs a fun theme centered on prehistoric animals like the wooly mammoth and saber-toothed tiger.

The base game is a five-reel, 40-line game with a cool multiplier feature in the primary game. Whenever the wild Cave symbol lands in a winning combination (it appears on the middle reels), it changes into an image of running animals that applies a 2X or 3X multiplier to the win.

During the free games, the Cave symbols apply 2X or 3X multipliers, but additionally, if more than one of the symbols appear on a reel, then each cave symbol on that reel will change to the same multiplier.

Everi has been one of the most prolific slot manufacturers in the way of developing traditional three-reel mechanical games. Lately, the company has used that expertise to offer the traditional-style games online.

One of Everi’s most popular casino offerings has been a series of traditional reel-spinners called “Smokin’ Hot Jackpots.” One of that series’ premiere games, Smokin’ 777, is now one of Everi’s more popular online titles as well.

Smokin’ 777 is a traditional three-reel, five-line mechanical-style game, with a classic, simple pay schedule including bar and “7” combinations. The bar symbols are presented with the word “jackpot” in white or gold. Pays begin for any three symbols. The bar symbols pay for mixed combinations, like white symbols and like gold symbols.

This is a traditional volatile gambler’s game, offered in high denominations, so start out with a good bankroll, and then wait out a house edge that is comparatively low for a slot game.

Do You Speak Slots?

Toga Party! When you make your first deposit at CaesarsCasino.com, the emperor will match it 100% up to $300 in casino bonus play!

One Last Weekend to