New Owner Could Reopen Revel Atlantic City Casino in May 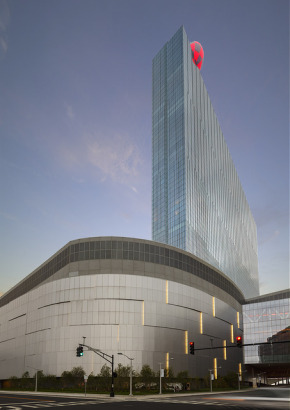 In another indication that a Colorado-based group is purchasing Atlantic City’s closed Revel casino, Moody’s Investor Services issued a report on the finances of the purchase and plans to reopen the property in May.

There has been no official announcement of a sale and the current owner of the property—Florida developer Glenn Straub—has denied he is selling the property to the group. However, local media and now Moody’s have been able to trace the sale through various filings with state and regulatory agencies.

According to the Moody’s report, the Colorado-based group AC Ocean Walk LLC will pay $200 million for the property and invest an additional $175 million. The group is planning to reopen the property by May 2018.

In another report from the Associated Press, AC Ocean Walk has also applied for a New Jersey casino license, which includes making a $100,000 non-refundable application fee.

In October, AC Ocean Walk LLC and Polo North Country Club Inc., owned by Straub, filed a notice of settlement for the sale of the property according to the Press of Atlantic City. Straub, however, denied he is selling the property when contacted by the paper. The Press also noted that there is still no record of sale of the casino at the Atlantic County Clerk’s Office.

The Moody’s report is reportedly based on financial documents surrounding the proposed loans needed to finalize the purchase. Last month, the company signed a mortgage committee letter with Deutsche Bank, according to county records. No terms were released in the filing, the Press reported.

The company was formed in April 1990 to handle acquisition, development, asset management, property management, leasing and disposition of commercial properties under the ownership of Deifik and his investment partners.

According to the reports, AC Ocean Walk will operate 100 gaming tables, 2,000 slot machines, 1,399 hotel rooms, pools, a spa, nightclubs and 13 restaurant options at the reopened property as well as 55,000 square feet of retail space and a parking garage with more than 7,000 spaces.

“The property is expected to slowly capture its fair share of the market given the quality of the property, breadth of project offerings and a revamped operating strategy aligned with the demands of patrons in the market,” Moody’s report said.

Straub and Polo North bought the closed Revel out of bankruptcy court for $82 million in 2015. The property cost $2.4 billion to build.

Straub has been unable to negotiate New Jersey’s casino regulations—as well as local building regulations—and has missed several announced dates to reopen at least parts of the property.

If Revel should re-open, it will complement other developments to revitalize the resort’s northern Boardwalk, which was hit hard by the casino closings of the Trump Taj Mahal, Showboat casino and Revel. Resorts casino was the only property in the casino cluster that did not close.

However, the Showboat has reopened as a non-casino hotel and Hard Rock International has purchased the former Taj Mahal and expects to reopen the totally renovated property in the summer.

Part of Hard Rock’s plans were announced as the company wants to build a gas station at the property’s entrance at the corner of Pacific and Virginia avenues. The plans were filed with the New Jersey Casino Reinvestment Development Authority which oversees the city’s casino and tourist districts.

Rockstop Gas & Wash would include a convenience store, gas pumps and a car wash. In June, Hard Rock opened its first gas station in Northfield, Ohio, as part of its Hard Rock Rocksino, according to the Press.

“The gas station is just one of many exciting things to come,” said Liz Thomas, a spokeswoman for the developers. “We’re so pleased to partner with Hard Rock during this renaissance in Atlantic City that wouldn’t be happening without the cooperation and support of the state of New Jersey.”

Hard Rock investors Jack Morris and Joe Jingoli are spending about $500 million to renovate the Taj. The company expects the project to generate more than 1,000 construction jobs and 3,000 permanent jobs, the Press reported.