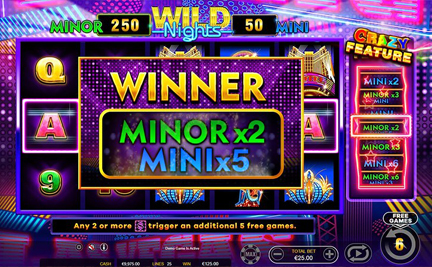 Go a little wild with a new online slot game from Ainsworth. Then lose yourself in a faraway land with a mythical new entry from Everi.

The base game is a five-reel, 25-line slot. The “Wild Nights” symbol is wild, appearing on all but the first reel. On the fifth reel, the wild symbol appears as a wild stack—all three spaces on the reel wild.

Before every spin, a random prize is chosen for what is called the “Crazy Feature.” It is displayed on a wheel to the right of the main game reels. This feature triggers any time the player lands one or more five-of-a-kind wins on the reels. When that happens, the game rewards the Crazy Feature prize, which can be one of five progressive jackpots, or even a multiplied win in the case of the “Mini” and “Minor” prizes. The Crazy Feature reel includes “Minor X3,” “Mini X6,” etc.

Three, four or five scattered bonus symbols award 10, 15 or 25 free games, respectively. During the free games, the Wild Nights wild symbol appears in all position, and on the fifth reel as a stack. Any two or more scatter symbols on a free spin tack on an additional five free games.

Available at ResortsCasino.com and MoheganSunCasino.com.

Make your first deposit at CaesarsCasino.com and see it matched up to $300 in casino bonus play. Start playing your favorite slots today! 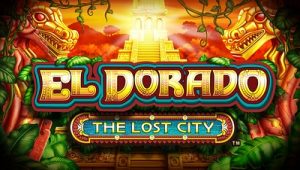 This slot game features a mythical theme and a unique random re-spin bonus feature, in addition to a multiplier bonus tied to the free-spin round.

The base game is a five-reel, 40-line slot with a random primary-game feature that can result in big credit awards. Randomly during base game play, in a feature called Reel Match, any or all of reels 2 through 5 stop and re-spin to land on matching symbols for big line wins.

Three or more bonus symbols trigger a free-spin round with a big extra: Just for triggering the bonus, the player is awarded a multiple of the total bet—2X, 5X or 20X, along with six free spins. The Reel Match random bonus is active on the free spins, and the feature is retriggered with additional multiplied rewards and six more free spins, should the the bonus symbols land in a free game. With continued retriggers, the free spin total can reach 90.

The Reel Match feature is available at any bet level.

Available at CaesarsCasino.com and GoldenNuggetCasino.com.

Double Your First Deposit up to $1,000 at GoldenNuggetCasino.com. Your first deposit will be instantly matched dollar-for-dollar up to $1,000!