HomePost TimeNew Tax Rules on Racing Wagers Are a Win-Win

New Tax Rules on Racing Wagers Are a Win-Win 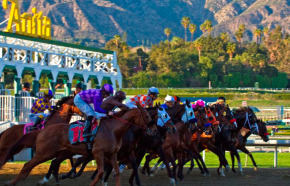 And down the stretch we come!

As the 2017 racing season concludes, we pause to reflect and project. Looking forward, Santa Anita finishes the season in style with the $300,000 LaBrea and Malibu Stakes one day after Christmas. It wraps up with the American Oaks for $300,000 on December 30.

We reflect on a high note.

Late this year, horse racing finally entered the modern age regarding tax implications for winnings. Under recently implemented regulations, the Internal Revenue Service will now consider the inclusion of a bettor’s entire investment in a single pari-mutuel pool when determining the amount reported or withheld for tax purposes, as opposed to only the amount wagered on the correct result.

For example, the amount wagered by a Pick Six player who hits with one of 140 combinations on a $1-minimum wager now will be $140, which is the total amount bet into the Pick Six pool. The multiple used to trigger a tax, a payout of greater than 300-1, now starts at $140, not $1. In this scenario, a bettor would have to collect several thousand dollars before federal tax would apply.

Bettors fumed when they’d play $50 on a race, collect $601 on a $1 trifecta wager and have to pay federal taxes. Their losing bets were not factored into the equation. It was the insult to the injury of the already high takeout percentages levied by the track, often 22-30 percent. Pay the IRS, too?

Some hedged their bets by collecting programs and losing receipts to place against the win totals at tax time. But, people who did not itemize deductions could not participate.

Now, it’s nearly impossible to pay federal taxes on a medium-range payout. Sports fans actually have a place in the winner’s circle of a rule change.

On this occasion, the big lobbyists benefited the little guy. The National Thoroughbred Racing Association has long pushed for the modernization of pari-mutuel withholding and reporting rules. As more pari-mutuel wagering targeted exotic wagering pools, it became clear that the outdated tax rules burdened the bettor.

These new rules are a combined effort the NTRA and other industry stakeholders undertook with Congressional representatives and the U.S. Treasury Department and IRS officials.

For the NTRA, there were benefits too. Gamblers who avoid wagers because of tax implications won’t put money into the pool that ultimately pays the tracks, owners, trainers and jockeys. That was financial suicide. This is win-win.

Did you take your blood-pressure medication for Week 15 of the NFL season?

Five games finished within one-half point of the midweek point spread. Five! Two more were within a field goal. And, we all know that the catch or non-catch by Jesse James for Pittsburgh against New England depended upon your ticket.

Watch for teams that need a win in week 16. Baltimore, Carolina, Minnesota, Jacksonville and the Los Angeles Rams looked the best of that group in Week 15. Teams that are out of it usually fade in the second half of these late-season games.