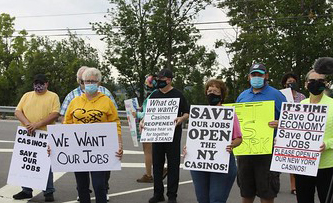 Casino workers across New York State last week rallied in front of their properties, which remain closed after more than five months. They demanded that Governor Andrew Cuomo hear their pleas and let them go to work.

In front of the Del Lago Resort and Casino in upstate New York last week, a crowd of casino workers yelled in unison, “Governor Cuomo, untie our hands and unlock our doors.”

Casino workers—frustrated and financially hurting—have rallied to call the governor’s attention to their plight. The gaming industry there is the only one in the United States to remain shuttered, more than five months after closing due to Covid-19.

Valerie McIntyre, a table games supervisor at Del Lago, is at the center of an organized effort to demand that the state reopen its casinos.

A few months ago, McIntyre started a Change.org page for employees, then collaborated with Greg Mallete and Robin Torr at Vernon Downs and Tioga Downs to form a Facebook group called Casinos Stand United. Currently, the group has more than 1,000 members.

They put up a petition at the beginning of July. Three weeks later, it had collected thousands of signatures. The current count is about 3,800, McIntyre told GGB News.

And six weeks after they posted the petition, they decided to up the effort a notch. “My thoughts were, ‘Let’s take this to Albany,’” said McIntyre. “I dialed for the permit. I submitted our Covid-19 safety plan. It was approved, and we contacted the police.”

That first rally was held August 20 in the state capital. “We heard nothing from Governor Cuomo, not a peep,” McIntyre reported. “We said to each other, ‘This is sad. Let’s take it to each individual casino.’”

The workers are unhappy at some of the governor’s comments about their industry. “Casinos are nonessential,” Cuomo has said. “People need food, people need clothes, people need home goods. You don’t need a casino to maintain survival.”

Unless, clearly, you are a casino worker.

As McIntyre’s rally was about to begin, she told GGB, “I have a congressman, two assemblymen and a spokesman from our senator speaking. We’re hoping for a huge turnout.”

Interestingly, none of these rallies was sanctioned or supported by the unions that represent casino and hospitality workers in New York. A spokesman for one of the unions said these rallies are not a union activity and that the organizers are managers, not union members.

McIntyre confirmed that. “We’re not doing this with any input from the casinos or the unions. This is the workers screaming to Governor Cuomo, ‘Help us.’ Truly grassroots.

“This is a lot of mental, emotional and financial stress,” she added. “I’m taking a huge hit from being out of work. With everything that’s going on, you can’t say to someone ‘In addition to this, we are now taking your employment away.’ This is my second career. I’m 60 years. I’ve been in the military and was a pediatric nurse. What I have to say is, ‘Governor Cuomo, it’s time to free us to get back to work.’ ”

The group has not heard from his office. “Not one word back from [U.S. Senators] Chuck Schumer or [Kirsten] Gillibrand, or Cuomo. We have all gotten back the same thing, ‘We are in receipt of your letter . . .’ I have pled this case over and over to the three of them, and not one word.

“I think it’s imperative that we get our personal stories out there. We’re not numbers. We are not data. We are human beings.”

Robin Torr, a hotel front desk manager at Tioga Downs, moved to New York for the job and helped open the hotel three and a half years ago.

Now, with her job in limbo, “The opportunities are not lateral around here,” she said. “Unemployment is not covering the mortgage. And even looking, I can’t find anything in my industry.”

Health insurance is also a big expense. Torr and her fiancé “are tied to the region. The whole family is here. My fiancé is 13 years in his job. He can’t just pick up and say, ‘See ya!’”

The rally at Tioga Downs went well, she said, with about 50 in attendance. “One of those attending was state Senator Tom O’Mara. He’s helping us to try to get people to recognize the economic impact casinos have on local business and municipalities.”

She continued, “The New York education fund is desperate, and it gets millions of dollars from the casinos. I don’t think most people realize how much the state depends on that revenue.”

If Torr could emphasize one message, it would be this: “This affects 10,000 people and causes a massive domino effect. It effects our vendors. The whole harness industry is completely funded by the casino, and a lot of casinos have racetracks. You have horses sitting in stalls now. The economic impact is huge.”

She pointed out that the owner of Tioga Downs, Jeff Gural, “helped rebuild the area a few years ago when the 100-year flood happened. He really gave back to Tioga County and the residents.”

She asked Cuomo to “to give us some guidance” on the safety measures casinos must meet in order to reopen. “The state has been less than 1 percent [of those tested testing positive for coronavirus] for a couple of weeks now. I don’t see how much lower we can go,” said Torr.

She suspects the governor may be trying to use the coronavirus to angle for federal aid. “We just hope we’re not a pawn for a federal bailout.”

Bethany Villante, a phone system operator at Del Lago, told GGB, “This has been absolutely awful. It’s starting to affect not just my husband, but his two kids.” The Villantes are currently relying on the New York unemployment system and getting $600 each week between them.

At the rally, Villante spoke. “I said point blank, it’s almost like we’re the forgotten ones. Cuomo is paying no attention to us. He’s outlawed live bands. He’s banned dancing at wedding receptions. But he’s allowing the VMA Music Awards to take place in New York City, which was the epicenter of Covid. He granted clemency to the celebrities, but if we leave the state, we’re quarantined. He has nothing to say except, ‘Casinos aren’t essential.’”

Casino employees and their families “beg to differ with that,” she said. “Capital One, which finances my car loan, would beg to differ. If we say we’re not working, they say, ‘You owe us this money.’”

Gordon Salmons, a table game supervisor at Del Lago, told GGB, “The anxiety of not being able to work is very tough. I have four kids. The oldest is 15. I’m worried about health insurance and paying my bills and putting food on the table. I’m getting close to running out of money.”

He’s ready to return to work, and said he would feel safe doing so. “I personally could go back. I’m pretty sure the casino is going to do everything possible to make sure we’re safe. I think within less than a week, we could be ready.”

In a related development, on August 18 both the City of Saratoga Springs and the Saratoga County Board of Supervisors passed resolutions supporting the reopening of Saratoga Casino Hotel.

Saratoga Springs Mayor Meg Kelly declared, “We cannot underestimate the value that Saratoga Casino Hotel brings to the City of Saratoga Springs. They have been working diligently to establish and implement safety procedures that are in line with Department of Health and CDC guidelines, which ensure all patrons and staff are safe.”

Salmons summed up the feelings of many casino workers when he said, “It’s incredibly tough to be left hanging, with no idea what’s going on with your life. I’m going to take every step possible to protect the customers. We are adults. Let us get back to work.

“I can’t live the American dream if I can’t work.”