HomeGambling RoundupNew York Could Be No. 1 in U.S. Sports Betting

New York Could Be No. 1 in U.S. Sports Betting 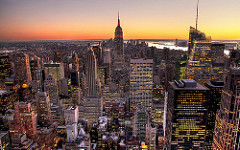 New research from GamblingCompliance says New York, Pennsylvania and New Jersey will overtake Nevada as the largest sports betting markets in the United States in the next five years.

A report from the firm titled “U.S. Sports Betting: Sizing the Post-PASPA Opportunity” predicts New York will generate more than $700 million a year in betting revenue in what is expected to be a $1.1 billion to $5.2 billion national market. New Jersey and Pennsylvania will be next with $300 million each, thus relegating Nevada, which for decades enjoyed a monopoly on single-game wagering in the U.S., to fourth place.

Currently, New Jersey and Delaware are the only states outside Nevada authorizing single-game betting, but a wave of intra-state legalizations are expected in the wake of a May ruling from the U.S. Supreme Court voiding a federal prohibition that had been in force for 25 years.

The New York Legislature adjourned for the year on June 20 without acting on bills in the Senate and Assembly establishing a regulatory framework, but pro-betting lawmakers have vowed to make it a front-burner issue for 2019.

The report predicts, in the meantime, that Mississippi, West Virginia and Rhode Island will move quickly along with Pennsylvania to enact regulations.

What forms those rules will take remain, however, a matter for speculation, according to the report’s authors, James Kilsby, the firm’s managing director for the Americas, and Daniel Stone, the head of data content.

“Policymakers will inevitably be challenged to strike a balance between their desire to maximize state tax revenues from lawful wagering and ensuring that licensed operators are able to offer odds that are competitive enough to challenge bettors away from offshore sportsbooks or underground bookies,” they write.

“We assume that Pennsylvania will prove to be an outlier with its eye-watering 36 percent tax rate on gross wagering revenue. Nevertheless, it may be difficult for states to stay in the ‘sweet spots’ of the roughly 15-20 percent tax rate that has characterized the most successful European online sports betting markets.”

The report says also that federal regulation of sports wagering is highly unlikely, noting that the National Conference of State Legislatures and gaming regulators in Nevada, Massachusetts, Michigan, and Louisiana have voiced their opposition.