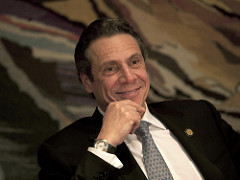 The state of New York is taking the Seneca Indian Nation to arbitration to settle a compact dispute that has halted revenue-sharing payments from the tribe’s three casinos amounting to more than $100 million a year.

The state invoked the compact’s arbitration clause by declaring the Senecas in violation of the 2002 agreement, which requires the tribe to pay the state 25 percent of their machine gaming revenue in exchange for a casino monopoly covering 16 western New York counties.

The tribe claims the revenue-sharing provision expired at the end of 2016 and made a $30 million payment in March to cover the fourth quarter, announcing that the payment would be the last pending the negotiation of a new agreement with the administration of Gov. Andrew Cuomo.

Reports are the Senecas are miffed by the state’s authorization in 2013 of four full-scale commercial casinos, three of which have opened in the last 11 months―one of them in particular, del Lago Resort & Casino in the Finger Lakes region, straddling the tribe’s exclusivity zone. The Senecas have not addressed the competition issue publicly, but the tribe has used revenue-sharing as leverage before, halting payments in 2009 following the state’s authorization of machine gaming at racetracks. The dispute took four years to resolve and ended with the state waiving a portion of the revenue obligation.

However, this time around the state is refusing to barter, claiming a provision in the 2013 agreement extending the original compact by seven years obligates the tribe to continue the payments through 2023.

“The answer is clear: The nation has breached the compact,” lawyers for the state wrote in the arbitration filing, according to the Buffalo News.

The payments currently amount to around $110 million a year―$1.4 billion since 2002―with 10 percent of it plowed back to the Senecas’ host casino cities―Buffalo, Niagara Falls and Salamanca―and a slew of smaller neighboring communities which rely on the funds to pay for an array of municipal services.

In light of this, the tribe may have figured that local pressure would force the governor to join Seneca President Todd Gates at the negotiating table. To date, that hasn’t happened. Instead, Cuomo recently threatened to license a competing commercial casino in Niagara Falls.

“The nation seeks to retain the benefits of the compact, including exclusivity, but not the obligation to pay for them,” attorneys for the Governor’s Office said. “But the nation’s position is illogical and has no basis in the compact, in law or otherwise. The nation cannot pick and choose the terms that are renewed.”

Seneca spokesman Phil Pantano countered, “The nation was open to dialogue. Instead, we are now seeing a repeat of the same behavior as when the state previously violated the compact. The Seneca Nation is not intimidated. The nation will commit its resources to defending the agreement we made, which the state now wishes to disavow.”

The arbitration rule allows both sides to select a representative with a third representative agreed to by both sides. Their decision is binding, but it can be appealed to the federal courts, making it likely the dispute could drag on for years unless a settlement is reached.