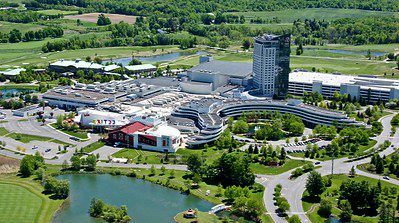 The Oneida Indian Nation takes Covid-19 seriously, and insists their guests do likewise. The nation’s New York casinos (including Turning Stone, l.) were among the first in the U.S. to make face masks mandatory, and also limit entry by people from states where the virus is on the rise.

New York’s Oneida Indian Nation is beefing up the health and safety rules at its three casinos, which went back into business on June 10.

Masks for all have been mandatory since the reopening of Turning Stone Resort Casino in Verona, the tribe’s flagship, and its two smaller Syracuse-area properties, Yellow Brick Road Casino in Chittenango and Point Place Casino in Bridgeport.

The casinos are also limiting entry to New York residents and those living within a 120-mile radius of the casinos.

The limits cover all 19 states named in the state’s recently expanded travel advisory, and require people coming from those states to self-quarantine for 14 days on entering New York. The list presently includes:

“They won’t be able to enter any of our properties, and we’re taking no hotel reservations from them,” Joel Barkin, the Oneidas’ vice president of communications, told GGB News. “It’s another example of our understanding that we needed to be aligned with our counties and our state. There’s no loophole that will allow people to get into our venues from one of these states.”

A smoking ban, which went into effect on a temporary basis July 10, will help ensure customers wear face coverings, and was partly a response to reports that many returning casino guests in Las Vegas were ignoring requests to wear masks, in spite of strong evidence that they’re effective in combating the contagion.

“We knew we had to get on that,” Barkin said, adding that the requirement began with Ray Halbritter, the Oneidas’ longtime “nation representative,” as he’s formally known, and the head of its extensive business enterprises.

“Our CEO made it clear that we wanted to be stay ahead of this and not be reactive,” said Barkin. “We’re playing the long game here, right?

“From the outset, we understood this is an evolving process, and we work very closely with our local counties and with health officials, and we act accordingly. This is part of that. It was our CEO who said, ‘Let’s do this now, and not wait until we have to.’”

“It’s a challenge to keep on top of the masks and make sure people are wearing them properly,” Barkin continued. “But as our CEO has made clear, this isn’t just the responsibility of security. It’s the responsibility of all 4,500 employees.” That includes Halbritter, who makes it a point to walk the floors to see the rules are adhered to, he said.

In addition to mandatory face coverings, the rules include enhanced sanitation procedures, including an HVAC changeover level that exceeds commercial code, and a limit on restaurant seating to 50 percent of capacity. Nightclubs, concert venues and events spaces remain closed. Staff members must have their temperatures checked daily, and on a regular basis are required to complete a health questionnaire to identify potential exposure to the virus. Those who work in direct contact with guests must wear gloves.

But the Oneidas were confident in the extensive safety protocols they had developed, a view shared by surrounding governments eager to see a major local employer come back on-line.

As to when and how the rest of the casinos’ attractions will reopen, Barkin said those decisions will come out of close coordination with local and state health officials and political leaders.

“There is no timetable,” he said. “It’s a matter of working with the experts and having them tell us the best way.”