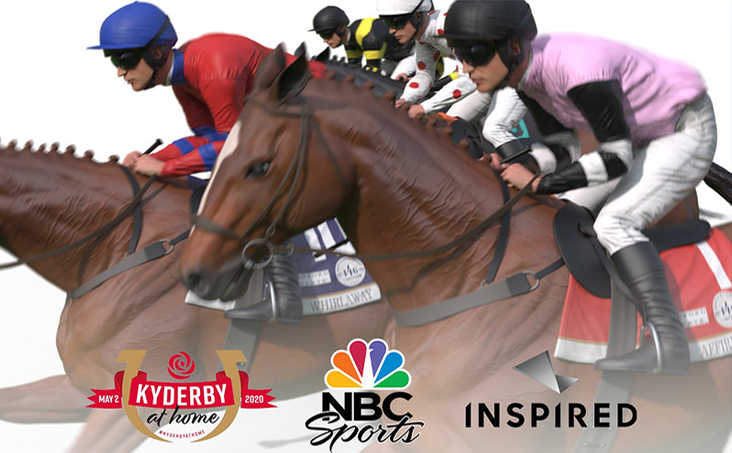 With the postponement of the Kentucky Derby, Churchill Downs and Inspired Entertainment have planned a virtual version of the world’s most famous race—starring every one of the 13 Triple Crown winners!

Get out your party hats, and mix up a mint julep.

We all know the real Kentucky Derby has been scratched until September 5 due to the Covid-19 outbreak, which has thrown a monkey wrench in almost all sports schedules. But race fans still have something to cheer.

A virtual Run for the Roses—The Kentucky Derby: Triple Crown Showdown—will be televised May 2 as part of Churchill Downs’ “Nationwide Virtual Kentucky Derby at Home Party.”

The legendary Louisville track has partnered with Inspired Entertainment, Inc. to create the event, which will be broadcast on NBC-TV this Saturday from 3 p.m. to 6 p.m. ET.

So, how will NBC stretch a two-minute race into a three-hour spectacle? Actually, the idea is pretty cool.

According to Churchill Downs, this race, an “ultra-realistic 3D CGI representation of the Kentucky Derby,” will feature all 13 Triple Crown winners from the past century in an “ultimate face-off.”

Yep, coming out of the gate this weekend will be these illustrious champs:

With competitors like these, how can you possibly choose? Well, historical information about the mounts and their racing records is embedded in the software, which helps you calculate their potential to win.

“This probability is based on their past form and performance in other races,” which can help you to handicap the race, said Brooks Pierce, president and COO of Inspired.

Even so, it seems a bit audacious to pit Secretariat against War Admiral, or evaluate Whirlaway against Affirmed. On the other hand, sizing up this kind of horseflesh will make the event even more fun.

Kevin Flanery, president of Churchill Downs Racetrack, said, “Our fans will be captivated by the realistic view of the virtual race and we can debate, as we do each year, our favorite to win.”

Place your bets! Visit www.KentuckyDerby.com to choose your favorite, and join the virtual party too. The event, which will also be streamed live on KY Derby Social Media, has something for everyone in the family, from a virtual tour of Clairborne Farm, a thoroughbred horse farm in the heart of the Kentucky bluegrass; a kids’ craft segment; a Handicappers’ Roundtable; a DIY “fascinator-making” presentation; and a virtual toast at 5 p.m., followed by the traditional singing of “My Old Kentucky Home.”

After the virtual Derby, stay tuned for the live running of the Arkansas Derby at Oaklawn Park in Hot Springs, Arkansas.