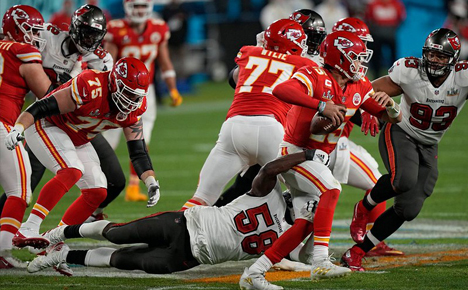 Here’s the betting market for the most wins in the 2021-22 NFL season, including the favorites, the maybes and the long shots.

As kickoff nears, let’s size up the betting market for the upcoming NFL season. Who will bring home the most wins?

Favorites: Chiefs, Buccaneers Lead the Way, Can Anyone Surprise?

If you’ve been looking at the win total market for NFL this season, then you’re not surprised by the order of these teams.

The Kansas City Chiefs (+450) had the most wins last season at 14 and still employ Patrick Mahomes, the best quarterback in the league. Even so, the value may lie with the team they lost to at Super Bowl LV (+600).

Tom Brady and the Tampa Bay Buccaneers bring back all the key contributors to their Super Bowl victory, and they’re playing the fifth easiest schedule in the league this season. With an easier NFC South than in the past, Tampa Bay could put up a big win total this season.

The Buffalo Bills (+750) had a strong 13-3 season, but the AFC East should improve with another year of Tua Tagovailoa with the Miami Dolphins and a rejuvenated New England Patriots defense. The New York Jets have a new coach and should be better than 2-14 too.

The Baltimore Ravens (+1000) have won double digit games in three straight seasons, and are projected to win the AFC North again. Their run-heavy style with quarterback Lamar Jackson is incredibly successful in the regular season, making them an intriguing bet as well.

Middle of the Pack: Will a Team Separate in the NFC West?

San Francisco has a ton of upside with a fully healthy defense that will have a stout pass rush now that Nick Bosa and Solomon Thomas are back. Whether it’s Jimmy Garoppolo or Trey Lance, the 49ers offense is loaded with speed at the skill positions and should be explosive.

The Rams acquired Matthew Stafford to give their offense some more consistency, but the question will be if they can hold up health wise considering their defense is centered around the likes of Aaron Donald and Jalen Ramsey. Don’t sleep on the loss of defensive coordinator Brandon Staley, who’s now the head coach of the San Francisco Chargers.

Russell Wilson led the Seahawks to a 12-4 season last year, but is there a ceiling to this offense? Or will Peter Carrol actually “let Russ cook?”

Ultimately, a big question this season will be if this division is going to beat up on one another, or will one dominate in 2021?

Elsewhere in this group: the Green Bay Packers (+2000). There’s some betting value on the Packers if you buy into Aaron Rodgers putting this past offseason behind him after a lengthy holdout. If Green Bay comes together, it can follow up back-to-back 13 win seasons.

Long Shots: Who Can Shock the League?

Once we get down further on the board it’s tougher to make a case for teams, but let’s see if we can hit a flier.

The Dallas Cowboys (+3000) have questions to answer but there is no denying the upside of the roster. If Dak Prescott is able to put concerns around his ankle to bed—and now his shoulder ailment during training camp—the offense is going to be one of the best in the league.

Most important, though, is that the Cowboys defense needs to improve. Dallas drafted linebacker Micah Parsons in the first round, but there are still a ton of questions on that side of the ball.

The other team that looks to be valuable is the Minnesota Vikings (+5000). They have just about a league average strength of schedule, but are due for a bounce back defensive campaign.

The team lost star pass rusher Danielle Hunter for all of last season, but he should be back to anchor a unit that went from the sixth best scoring defense in 2019 to the fourth worst in 2020.

The offense should continue to be great this season with running back Dalvin Cook and budding star Justin Jefferson at receiver. If the Packers slow down after back-to-back 13 win seasons, the Vikings could end up with that type of record.

BetQL’s computer model analyzes every bet, every day to find mispriced lines. Get started for free at BetQL.co.