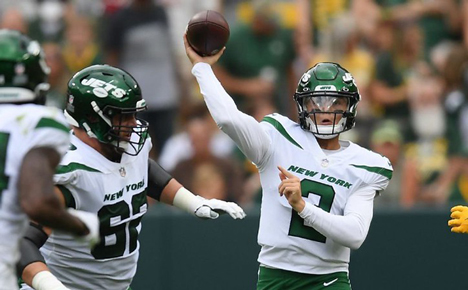 Should you buy or sell the New York Jets ahead of the 2021 season? Let’s run down the value on their win total.

The New York Jets enter a new era in 2021, but should sports bettors expect a different result on the field this season?

There are a lot of bullish signals around the Jets. Let’s see if there’s betting value on their win total, set at six wins.

Get the BetQL Day Pass for access to all the BetQL Model’s plays for 24 hours at just $4.99!

I have Gang Green projected for about 6.5 wins in 2021, and a slight lean towards the over, but not enough to bet it.

The Jets did all the right things in the offseason, drafting their quarterback-of-the-future in Wilson, while also snagging a high-upside wide receiver in Elijah Moore. Moore will replenish skill positions that have been underwhelming over the past several years.

Mike LaFleur comes from the Kyle Shanahan coaching tree as offensive coordinator, and the preseason returns have looked solid. Wilson is dynamic as a runner and has a big arm. I expect LaFleur to use the rookie QB well.

New York was comically bad on offense last year—31st in DVOA—but there are foundational pieces, such as last year’s first-round pick Mekhi Becton on the line, and another 2021 first-round pick in Alijah Vera-Tucker at guard. If the prospects follow a standard development curve, the Jets should put together a sound offense as soon as this season.

Tevin Coleman is a solid running-back signing when he’s healthy, and is surrounded by rookie Michael Carter from the North Carolina Athletics, who can end the season as the No. 1 back. The biggest splash was signing receiver Corey Davis from the Tennessee Titans, who gives Wilson a proven target out wide.

This offense unit can be respectable quite quickly if things fall into place. I expect Wilson to put up counting numbers quickly, even if it includes some interceptions.

I was high on the defense heading into the season, but the unit took a hit when Carl Lawson ruptured his Achilles this past week. He was expected to be the team’s best pass rusher, but don’t count out Quinnen Williams, who had seven sacks last season.

The health of C.J. Mosley is also going to be important. Mosley only played two games in 2019, and opted out of the 2020 season. When healthy, he’s a good bet to make over 100 tackles.

The secondary is a major concern, as only one projected starting corner has NFL experience. Bless Austin is going to be the No. 1 cornerback; he’s started 16 games over his two seasons. Second on the depth chart is Bryce Hall, who’s a second-year fifth-round pick. This is an unproven unit that will be picked on early and often.

Head Coach Robert Saleh is going to have his hands full on this side of the ball and is already down a key cog on the line. Bottom line, I see the Jets being a strong over team this season, with the offense outperforming their expectation. But the defense won’t stop anyone.

(logo/link) New customers at BetMGM start with a risk-free bet, up to $1000. If your first bet loses, you’ll get back the same amount in free bets.

Rookie of the Year Odds*