HomeThe ShuffleNFL 2021 Odds: Who Will Have the Most Rushing Touchdowns?

NFL 2021 Odds: Who Will Have the Most Rushing Touchdowns? 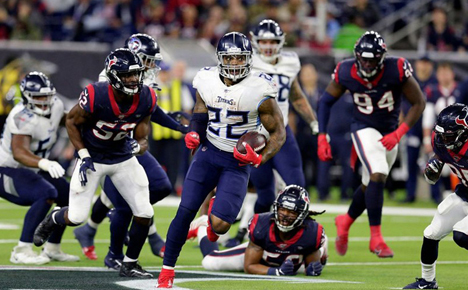 Derrick Henry and Dalvin Cook have the shortest odds for rushing touchdowns in the upcoming NFL season, but are they your best bets? Let’s look up and down the pack.

Derrick Henry and Dalvin Cook have the shortest odds for rushing touchdowns this NFL season, but are they your best bets? Let’s take a look at who’s most likely to deliver.

Two running backs, the Tennessee Titans’ Derrick Henry and Minnesota Vikings’ Dalvin Cook are the two favorites to lead the league in rushing touchdowns, each sitting at +450.

The Titans RB led the league in 2020, scoring 17 times on the ground after sharing the touchdown title in 2019. Meanwhile, Cook scored 16 times in 14 games last season and is getting a ton of respect from oddsmakers.

Three other backs are inside of double digits: Jonathan Taylor (+700), Nick Chubb (+800), and Christian McCaffrey (+800). Taylor is the bell cow of the Indianapolis Colts, who have one of the best offensive lines in the NFL.

As for the other two, Chubb is in a timeshare with Kareem Hunt, which can limit his total, while McCaffrey is an elite pass catcher. This could chip away at his rushing TD total.

Get the BetQL Day Pass for access to all BetQL Model’s plays for 24 hours at just $4.99! Get started at BetQL.co. 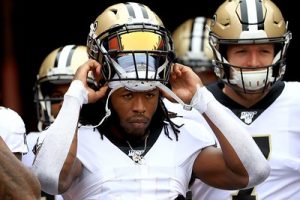 A lot of big names have long odds to lead the league in rushing TDs. Alvin Kamara (+1400) of the New Orleans Saints is a threat to score on any play, but how will the Saints offense look without Drew Brees calling the shots?

The Dallas Cowboys’ Ezekiel Elliot (+1500) is looking to have a bounce-back in 2021 after a disastrous season, but with Dak Presscott back, will he take some of Zeke’s touchdown carries?

The New York Giants’ Saquon Barkley (+1800) is back after a torn ACL. Videos have circulated of him working out, and he looks like he’ll be in good shape ahead of the 2021 season. However, the Giants offense has struggled despite Barkley’s immense talent. So how many opportunities will he get to punch it in?

Antonio Gibson of the Washington Football Team and Cam Akers of the L.A. Rams are each emerging talents in the league, and are both 18-1 to lead the league in rushing.

After tying Henry for the league lead in rushing touchdowns in 2019, Aaron Jones of the Green Bay Packers is +2500, likely because of the unknown around the offense with Aaron Rodgers still holding out. If Rodgers ends up playing for the Packers, this number will shrink.

Double down on your first settled bet with up to $250 in free bets at GoldenNuggetOnline.com (minimum odds -200).

Longshots: Quarterbacks on the Board

Kyler Murray of the Arizona Cardinals ran for 11 touchdowns in 2020, and oddsmakers are giving him respect in this market, making him +2800.

Philadelphia Eagles starter Jalen Hurts is another quarterback on the board; he’s +3500 as the leading man in Philly. Hurts has shorter odds than his teammate, running back Miles Sanders, who is +4000.

Rookie running back Najee Harris of the Pittsburgh Steelers also makes an appearance at +4000. The team’s first-round pick is expected to relieve some pressure on quarterback Ben Roethlisberger, and will surely get the goal line carries.

Create a new player account at Unibet.com today and your first cash bet is insured up to $500 back if you don’t hit a winner.