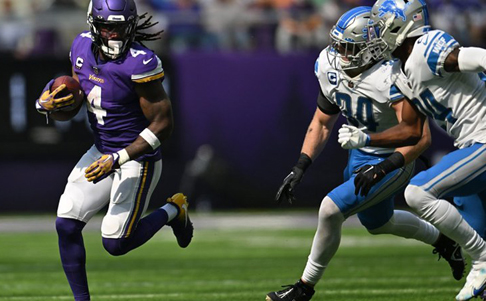 Get the NFL 311 for week four as our writer takes a look at Detroit, Dallas, Philadelphia, Buffalo and Joe Burrow his week.

The 311 consists of three NFL games that I select using the spread or money line, one game that is selected based on the total number of points for both teams going over or under and one player projected production for the game and if he exceeds or falls short of that number. This will give you action every week that is based on trends and matchups.

This is Week 4 of the NFL 2022-2023 season. The third week of action had the favorites covering seven times and the dogs nine. The games split for the total, going eight under and eight over.

The teams with the best record against the spread are the Detroit Lions, Atlanta Falcons and Miami Dolphins. My record in last week 311 was 3-2. My 311 record for the year is 6-9.

The Detroit Lions are favored by four over the Seattle Seahawks, jumping up from the opening line of one. Detroit is the home team. The Lions are one of the top offenses in the league, no really. They are averaging 6.0 yards per play on offense and are third in the league at 409 yards averaged per game.

The Seahawks are allowing 6.3 yards per play on defense. Seattle is averaging 15.7 points per game. The Lions have scored a touchdown in 11 straight quarters to start the season. If that trend continues against the Seahawks that would project to a 28 to 16 victory. Take the Lions to cover.

Prediction: Detroit -4 over Seattle (-110 at BetRivers)

The Dallas Cowboys are favored by 3.5 at home against the Washington Commanders. Dallas has won two straight games after the injury to quarterback Dak Prescott.

The Commanders have lost two straight. Washington is averaging 21 points per game. The Cowboys are ranked in the top five in total defense in the NFL. They pressure the quarterback well and in their win over the Giants, did not allow any receiver to gain over 50 yards.

Washington allowed nine sacks against the Philadelphia Eagles. This trend should continue against Dallas. The Cowboys are leading the NFL in sack average per game. In the last eight division matchups, the Cowboys have won seven straight. Cowboys will cover for their third straight win of 2022. 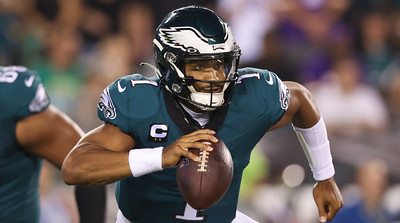 The Philadelphia Eagles are favored by 6.5 against the Jacksonville Jaguars. The Eagles have won three straight and are playing better every week.

The Jags are playing well on defense and have only given up a total of 10 points in their last two games. This is a homecoming game for Jags Head Coach Doug Pederson who led the Eagles to the 2017 Super Bowl win.

Philadelphia quarterback Jaylen Hurts is having his best start in his short NFL career. Hurts has thrown for more than 300 yards in his last two games.

The Eagles have a 2-1 record against the spread. This is the second straight road game for the Jags, and they traveled cross country last week when they defeated the Los Angeles Chargers. Take the Eagles to cover.

Prediction: Philadelphia -6.5 over Jacksonville (-110 at Caesars)

Bills Get Back on Track Offensively

The Bills were slowed offensively in their loss to the Miami Dolphins. The Ravens have allowed 68 points in their last two games. This is a marquee quarterback matchup between Josh Allen and Lamar Jackson. The game goes over 52 points. 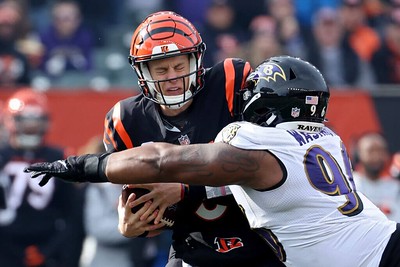 Cincinnati Bengals quarterback Joe Burrow will go under 272.5 passing yards. Miami’s defense was very impressive in putting pressure on Buffalo quarterback Josh Allen. Miami holding Allen and Co. to a 50% red-zone conversion rate, 5.5 yards per play, and keeping them out of the end zone in the second half.

Burrow has been sacked 15 times so far this season. He has one of the worst offensive lines in the league. He won’t have time to go deep so will go under the total of 272.5 passing yards.