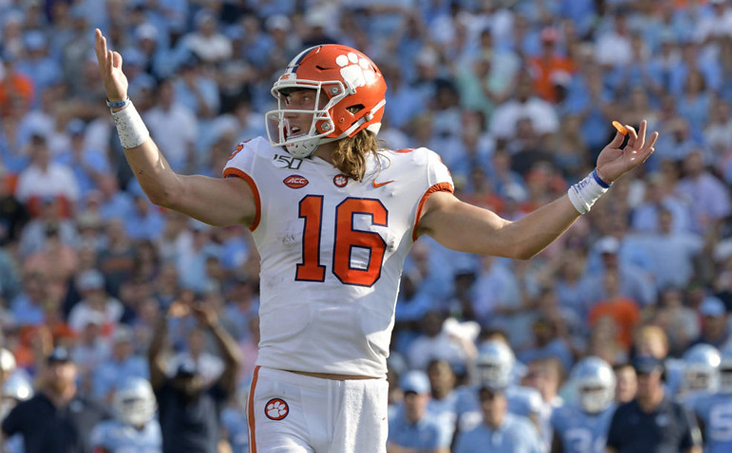 Quarterbacks are always a hot commodity in the NFL Draft, and this year is loaded with talent at the signal-caller position. Experts have the first four picks being QBs when the draft begins April 29.

Quarterbacks are always a hot commodity in the NFL Draft, but this year may see the biggest talent pool ever at the signal-caller position.

Mock drafts say the first four picks will be QBs when the NFL Draft begins Thursday, April 29. That’s never happened in its 85-year history. The closest was three successive QB picks in 1971 and 1999. In ’71, Jim Plunkett was No. 1, Archie Manning second, and Dan Pastorini third. In ’99, Tim Couch went No. 1, followed by Donovan McNabb and Akili Smith. 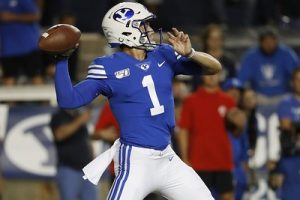 Trevor Lawrence is the overwhelming consensus to go No. 1 in this NFL Draft. Most sportsbooks, including William Hill, BetMGM, and PointsBet, have the QB at -1000. Zach Wilson (l.) is the second pick at +1500.

Will Total QBs in First Round Break Record?

Oddsmakers have set the line for the total number of quarterbacks taken in the first round at 5.5. At PointsBet, the under is the favorite at -400, while the over is set at +300. At William Hill, it is -450 for the under and +350 for the over.

The record for the most quarterbacks taken in the first round was six, and set in 1983. John Elway went No. 1 that year, but the next QB, Todd Blackledge, didn’t go until the seventh pick. Jim Kelly and Tony Eason went 14th and 15th, followed by Ken O’Brien at 24 and Dan Marino at 27.

Most analysts agree with the sportsbooks about this year’s QB class. They project five going in the first round. And the Pro Football Network predicts that the next one won’t be selected until the third round.

Win or lose, your sports bets pay off every week at BetMGM.com. Join the Money Monday Club for a $10 Free Bet when you place $50 in qualifying wagers during the previous week (Monday through Sunday).

The Falcons have a decision to make. If they don’t opt for a quarterback at No. 4, which some analysts project, they might do one of two things. One is to trade the pick, though the price to move to this spot is too high for most organizations. 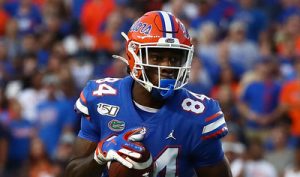 The next option would be to take tight end Kyle Pitts of the Florida Gators (l.). Pitts has been called a once-in-a-generation talent, and Dallas Cowboys owner Jerry Jones even said he’s “infatuated” with Pitts.

Pitts told a national radio show he was honored at Jones’ comment. “Dallas is a great team,” he said. “If I could have the opportunity to play for [the Cowboys], it would be a great thing.”

It’s doubtful Pitts would fall all the way to No. 10, so the Cowboys would have to trade up. But it sounds like Dallas management is more focused on improving the team’s defense, which was pitiful last year.

Other Prop Bets to Watch

The one position that seems to produce the most first-round picks is offensive lineman. If a team expects to have a franchise quarterback, they better get some players that can protect him.

The Cincinnati Bengals learned that lesson last year when they watched rookie Joe Burrow get pummeled until Week 11, when the former LSU Tiger suffered a torn ACL and was knocked out for the rest of the season.

It’s no surprise that Cincinnati is looking at taking offensive tackle Penei Sewell of the Oregon Ducks with the fifth pick.

Sewell’s one of eight offensive linemen who could go in the first round. William Hill has the over/under at 6.5. The over is the underdog, however, fetching +100, while the under is set at -130.

Another intriguing prop bet is who will be the first running back taken in the draft. That position has almost become an afterthought, as the league’s transitioned to passing dominated offenses.

But two players are vying to be the first rusher selected in this NFL Draft. The favorite is Najee Harris of Alabama, listed at -145. The second is Travis Etienne of Clemson, listed at +160. Some think Etienne might go before Harris. For more insights on the 2021 NFL Draft, click here.

Here’s a look at early odds* for Super Bowl LVI, to be played February 13, 2022, at SoFi Stadium in Inglewood, California.

From now till Super Bowl Sunday, read all about the 2021-22 NFL season, right here at iGamingPlayer. Subscribe below.