HomeThe ShuffleNFL Draft: Lance, Fields or Jones No. 3 to the 49ers? 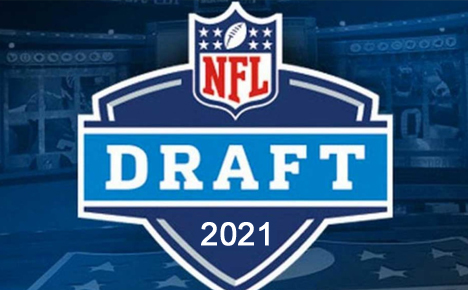 The 2021 NFL Draft truly begins at pick No. 3, with the highly anticipated San Francisco 49ers selection. But news continues to shift the No. 3 pick market.

The 2021 NFL Draft truly begins at pick No. 3 with the highly anticipated San Francisco 49ers selection.

The 49ers traded with the Miami Dolphins for the third pick, and will be deciding between quarterbacks Mac Jones, Justin Fields, and Trey Lance.

San Francisco brass is expected to be “heavily involved” in Lance’s workout on Monday, per ESPN’s Dan Graziano.

“I am told the 49ers are extremely involved in the Trey Lance workout scheduled for Monday. Lance, who works with QB coach Quincy Avery, spent the past couple of weeks working with QB coach John Beck. Kyle Shanahan coached Beck in Washington a decade ago, and trusts his opinion,” Graziano said on April 19.

The betting markets reacted to the news swiftly. Lance’s odds to be the No. 3 pick dropped to +175 from + 300 on Sunday afternoon. Justin Fields remains the favorite at +100, with Mac Jones also at +175 after being as high as -300 about a week ago.

This is pretty ho-hum based on the news cycle. Players who are linked to a team will see their odds shorten purely based on smoke. So, how much smoke is around Lance to San Francisco?

I’m not putting too much stock into it. I wrote last week that I saw value in grabbing Justin Fields under 4.5, and think he’s still the guy who goes third.

While Lance is connected to quarterback coach John Beck, so is Fields. I think this is part of the due diligence process from San Francisco and the recent odds shift creates opportunities elsewhere.

Make your first sports wager of $20 or more at BorgataSports.com and receive $100 in free bets. Just sign up and deposit into your newly created account, and you’re set!

While I still don’t see the Alabama signal caller as a QB ready to lead a San Fran roster that’s built for a Super Bowl run, I can’t deny the smoke around it.

I bought the dip on Fields in the market, and see the odds shift for Lance a way to buy a dip on Jones at +175, giving myself multiple ways to come out with profit when the third pick is announced. Look for Lance’s odds to grow as we get closer to draft night.

I don’t buy Lance as a threat to go third at this point in time. With more than a week until the draft, expect more movements in this market.

Will First Round Go ’Bama? 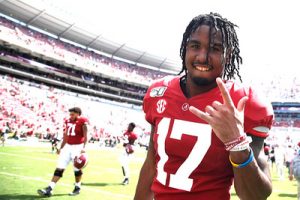 A small battle is emerging in 2021 NFL Draft betting markets, and it’s between two Alabama teammates. Heisman Trophy winner DeVonta Smith and Jaylen Waddle are each slated to go in the first round on April 29, but who will go first?

It’s being lined as a coin flip.

While both receivers are listed at -112, I show a slight edge to Waddle, and now’s the time to pounce on this bet. We can debate who will have the better NFL career all we want, but we are merely looking at who will be drafted first.

Waddle played in six games before fracturing his ankle this past season, but was able to return in the National Championship game. While he was limited, there seems to be no concern about his ankle long term, as noted by Ben Standig of The Athletic.

A lot of betting on the NFL Draft revolves around reading the tea leaves in the media and piecing together information. The Standig report commented directly on the debate between Smith and Waddle.

“That said, despite significant love from media analysts, teams view Smith as the third wide receiver behind Ja’Marr Chase and Jaylen Waddle, Smith’s Alabama teammate. The higher they go off the board—and Waddle could go first—the better for Smith. The Giants could snag Smith at No. 11. So could the Eagles one pick later or the Patriots at No. 15.”

It appears that Waddle has a higher ceiling on April 29, and is being undervalued in the market. Standig even ventured to say Waddle could go before Chase.

For what it’s worth, Chase is -625 to be the first receiver taken, Waddle +600 and Smith +700. There’s a disconnect between the first receiver prop and this specific one, giving us bettors an opportunity to bet into a mispriced market.

Albert Breer of Sports Illustrated also mentioned that Waddle could be in play at No. 6 to the Miami Dolphins. “I’d be surprised if Chase isn’t first, Waddle isn’t second (maybe as high as sixth overall) or Smith isn’t third among the receivers taken,” Breer wrote Monday morning.

So, here are two different plugged in reporters hinting that Waddle is ahead of Smith draft boards. Further, Waddle is being placed inside the Top 6 at times. With Miami in the market for a receiver, this connection has legs.

I expect this line to move towards Waddle ahead of the draft, and this is the time to buy it. Waddle is healthy, and is starting to gain steam as a top 10 pick. I’d play it up to -125.

Get big value on Daily Odds Boost Specials at BetRivers.com! From Moneylines to Spreads, Props to Parlays, get the best prices in the industry on the games and storylines YOU want to bet.