With Week 1 of the 2020 NFL season in the books, a couple teams have done a lot to boost their stock. Here’s why the Green Bay Packers are trending up, and the Philadelphia Eagles are trending down.

The first week of this NFL season did not go as expected.

On Sunday, favorites went 7-6. And in a week when many bettors didn’t have much to go on except favorites and Matthew Berry’s opinion, it was a rough kickoff all around.

So, which teams performed above and below expectations? Let’s look at the chart.

Green Bay Packers
After his team drafted Utah State QB Jordan Love in the first round and opened as underdogs to division rival Minnesota Vikings, it’s safe to say Packers’ QB Aaron Rodgers was mad heading into the season.

That showed in a big way Sunday, with Green Bay victorious 43-34. Rodgers lit up the stat sheet for 364 yards and 4 TDs in the air, and his defense, despite allowing 34 points, looked like the same bunch that got this team to the NFC Championship game last winter.

Don’t sleep on this Packers lineup. They’re serious contenders who could go to the NFC championship this year.

Watching a lot of football these days? In-play is in! Bet $50 In-Play on the NFL, and get a FREE $20 In-Play Bet, all season long at BetMGM.com. Keep the action going all four quarters! 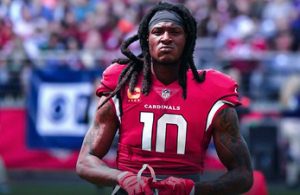 After trading for star WR DeAndre Hopkins, drafting Clemson LB Isaiah Simmons, and inking Budda Baker to the largest contract extension by a safety in NFL history, plenty of people were excited about this 2020 Cardinals team, but I don’t think they realized exactly how good the Cards might be.

The San Francisco 49ers, who are very close to the near-Super Bowl champs they were a year ago, still didn’t have enough to get past Arizona in Week 1. Hopkins went for 14 catches worth 151 yards in his Cards’ debut, and was one of many things to be excited about for this up-and-coming squad. Don’t be surprised if Kyler Murray enjoys a 2019 Lamar Jackson-esque breakout season en route to a playoff run in Glendale. 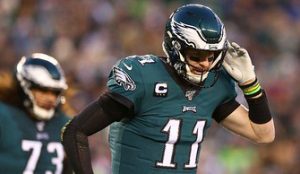 The injury bug is back in a big way in Philly! The Eagles went into its first game of the season down seven of its 22 starters already, and lost multiple more key players during opening day.

As a result, QB Carson Wentz had no room for error on Sunday. Unfortunately, there were several errors in the North Dakotan’s game, as he finished with the worst QBR league-wide after a near-perfect first quarter. Philly needs to solve one the injury problems and the Wentz problems ASAP, or it could be another very disappointing end to a Philadelphia sports season.

Sign up to wager at PointsBet.com, and get 2 risk-free bets up to $1,000! Your 1st Fixed Odds bet & 1st PointsBetting bet will be refunded as a Free Bet if they lose.

Indianapolis was the biggest favorite on this week’s NFL slate, ending at an average of about -400 on the moneyline. They lost. The Jacksonville Jaguars are very bad, having completely unloaded 90% of their talent this off-season in an attempt to rebuild. They had no business competing Week 1, especially after so much uncertainty in the locker room in the off-season.

QB Philip Rivers looked awful, throwing for more interceptions than touchdowns on the way to just 17 points against a horrible Jaguars’ defense. And the defense, which is supposed to be above average at the very least, just cannot allow 27 points to Gardner Minshew and a bunch of plug-in running backs and wide receivers. This loss is inexcusable, and needs to be corrected soon if the Colts want a chance to compete for a very tough AFC South division.

Is Authentic the Hor