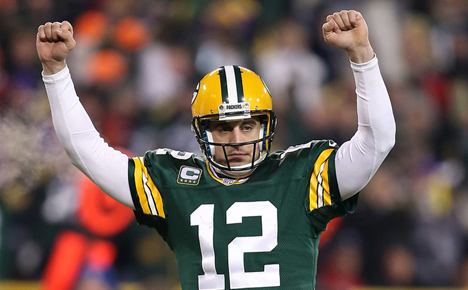 Aaron Rodgers’ return has the Green Bay Packers as division favorites once again. Here are some more winning trends for the NFL season.

A NFC North division has been a hot talking point this offseason, centered around questions about Aaron Rodgers’ availability to the Green Bay Packers.

After appearing at training camp last week, Rodgers and the Packers are set to make it three straight division crowns.

The Minnesota Vikings will look for better health and another trip to the postseason, while the Chicago Bears drafted their quarterback of the future in Justin Fields in the 2021 NFL Draft.

Lastly, the Detroit Lions have a new quarterback after trading Matthew Stafford for Jared Goff. Can they surprise under new coach Dan Campbell?

Get the BetQL Day Pass for access to all BetQL Model plays for 24 hours for just $4.99. Try it out at BetQL.co.

The news of Rodgers’ return to Green Bay for this season changes the outlook for the Packers. The reigning NFL MVP is sure to take the team back to the postseason, and the BetQL Model has Green Bay pegged to win the division.

Green Bay’s offense is set to be dynamite once again, after back-to-back NFC Championship games.

Davante Adams will look to follow up his league-high 18 touchdown catches in 2021, while running back Aaron Jones will attempt to make it three straight seasons topping 1,000 yards.

The Vikings struggled with injuries last season, and are hoping to return to their winning ways after three straight seasons over .500 before an underwhelming 7-9 2020.

The BetQL Model isn’t as high on the Vikings. There are doubts about quarterback Kirk Cousins’ ability to raise the ceiling of the offense, which has weapons such as second year pro Justin Jefferson and stud running back Dalvin Cook.

Minnesota’s defense regressed heavily last season, allowing the sixth most yards per game. That’s a concerning metric, considering the Vikings were able to generate third-down stops at an unsustainable clip, allowing only four third-down conversions per game, for Top 5 in the league.

If teams are able to extend drives more in 2021, the defense can continue to be an Achilles heel to their playoff hopes.

Boost your personalized parlays at PointsBet.com. Get 1 boost on traditional parlays and 1 boost on single game parlays every day!

The Bears appear to be rolling with free-agent acquisition Andy Dalton at quarterback. That can hold down their win total, as Dalton struggled with the Dallas Cowboys last season, posting a 4-5 record in nine starts.

There’s not much of an edge in betting the Bears over or under, which is set at 7.5 with money coming in on the under (-125). With questions at quarterback, it may be best to wait this one out.

Chicago’s offense will hinge on when the team goes to first-round pick Fields, who was explosive at Ohio State in 2020. However, the Bears have a host of weapons, such as running back David Montgomery and lead receiver Allen Robinson.

The defense will be stout, with Khalil Mack and Roquan Smith anchoring a unit that’s consistently ranked in the top of the league in scoring defense.

The NFC North’s biggest edge in the win total market is in the Motor City, according to the BetQL Model. It projects the Lions to go nearly one win over their win total of 5. At even money, you can take this over.

The Lions did lose their star receiver Kenny Golladay to the New York Giants in free agency, while also moving on from long time quarterback Matthew Stafford. But the model still believes Detroit has enough to clear this win total with Goff at quarterback and the emergence of second-year running back D’Andre Swift.

The Lions drafted Oregon offensive lineman Penei Sewell, who’s expected to make an instant impact. And they hope second-year cornerback Jeff Okudah can take the next step in his development.

New customers get a risk-free bet up to $600 at BetMGM.com. If your first bet loses, you’ll get the amount of your wager back in free bets.