The NFL is cooking up three big games for you to feast your eyes on this Thanksgiving.

This Thanksgiving will be full of great NFL competition, as all three games feature exciting matchups. Of the six teams playing, five have winning records and are either leading their respective divisions or sit just a game or two behind. Each game should be close and will provide something to be thankful for this Turkey Day.

No John Madden turkey legs will be handed out this year. Madden began the tradition of handing out a turkey leg to the star of the game on Thanksgiving Day in 1989. Madden passed away last December. But the NFL is set to honor him with a new annual Thanksgiving tradition. For this year’s games, the “Madden Player of the Game” will have a $10,000 donation made in their name to the youth or high school program of their choice by the NFL Foundation. This is a perfect way to honor a man who gave so much to the game throughout his career as a coach and broadcaster. Now let’s get to the meat of this article. Here’s a quick preview of each game.

The Buffalo Bills bounced back from two straight losses with a win last week and still find themselves as consensus Super Bowl favorites. The Detroit Lions are on a three-game winning streak themselves and have begun to find ways to be effective on offense.

Detroit will likely have to lean on their passing game, which has been working well lately, especially if they trail in this one. The Bills secondary ranks 20th in the league, allowing 220.8 yards per game through the air, so this will be the matchup to watch in determining who covers the spread.

The Lions are 6-4 against the spread this season while the Bills are 5-4-1. This is a large spread to cover, especially with Detroit at home and playing well. If they can find that passing game they will be able to stay in this one and keep it close enough to cover.

This is a huge NFC East battle with second place and a top Wild Card spot on the line. Both the Dallas Cowboys and New York Giants started 4-1 and have dropped two of their last five since, leading up to this crucial clash for playoff positioning.

Dallas has been suffocating opposing QBs, allowing just 174.5 passing yards/game, least in the NFL. They do, however, struggle defending the run, allowing the seventh-most rushing yards/game with 136.1.

The Giants are rushing for the fourth-most yards/game in the league at 157.2, mostly coming from star running back Saquon Barkley. They should be able to exploit this matchup and run all over Dallas.

These teams are both solid against the spread this season, boasting the same records as their actual W/L records. That being said, nine points is a spread that tends to favor the underdog, especially in an important division and Wild Card matchup. This won’t be a double-digit margin, go with the G-Men in this one.

Those G-Men have consistently averaged around 20 points/game this season, while the Cowboys have been very inconsistent with their scoring outputs.

Minnesota Squeezes Out Close One 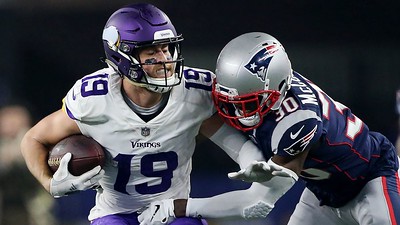 The New England Patriots host the Minnesota Vikings for the after-dinner crowd on Thursday. These two teams come in with opposite momentum behind them. The Patriots have strung together three consecutive impressive wins to get themselves back into the playoff race. The Vikings on the other hand, are coming off an embarrassing 40-3 beatdown at the hands of the Dallas Cowboys.

The Vikings’ stats are very skewed this season due to the two losses they have taken to two of the NFL’s best teams in Philadelphia (24-7) and Dallas (40-3). In their eight other contests (all wins), they have been extremely effective on both sides of the ball and have shown a knack to grind out close wins.

The Patriots also played in a ton of tight games as a result of great defense and stagnant offense. This one should be the closest, most exciting game of the day.

With a chip on their shoulder after a blowout defeat a week ago, the Vikings should bounce back at home against the Pats. The team hasn’t lost two in a row this season and I don’t expect them to start here. Minnesota fans should be going home happy this Thanksgiving.

Minnesota’s defense, if you take away their two losses, has allowed just 20.9 points per game. New England’s defense has allowed 17, three, and three points in their last three games.

Pala Gets High 5 for