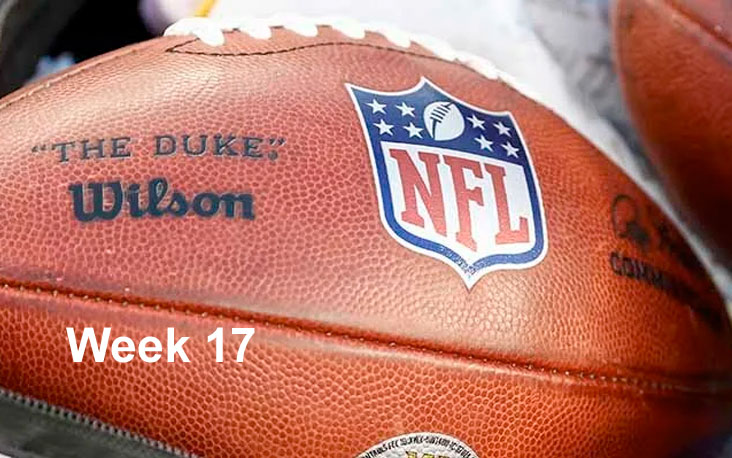 With just two weeks left in the NFL regular season, the Week 17 matchups are heavy with playoff implications. Sunday will be a full day of football, with no games Thursday or Saturday. Let’s take a look at the slate and what it means.

We have two marquee games: Arizona Cardinals at Dallas Cowboys, and Kansas City Chiefs at Cincinnati Bengals. There have been changes in the odds for both games.

The Cardinals, who are currently holding on to the NFC’s No. 5 seed in the playoffs, have struggled, and lost their last three games. Dallas is on a four-game winning streak, and is currently the second seed.

The line opened at BetMGM with Dallas -2.5, but has jumped to -5.5, the largest increase of Week 17. The Cardinals are 0-3 against the spread in its last three, while Dallas is 3-0 ATS.

After winning their first seven games, the Cards are 3-5—and one of those defeats was an embarrassing 30-12 loss to the 2-12 Detroit Lions. Arizona has qualified for the playoffs, but how long will this team stick around?

Conversely, Dallas seems to be peaking at the right time. The Cowboys clinched the NFC East last Sunday, and could be the top seed if they win their last two games and the Green Bay Packers lose their last two.

Combine Dallas’ defense, ranked seventh in points allowed, and the sputtering Cardinals offense, and 5.5 points seems like a low number. Look for Dallas to win by a touchdown.

Bet the NFL as a new customer and get up to a $500 refund (free bets) if your first fixed-odds bet loses at PointsBet. Get started today! 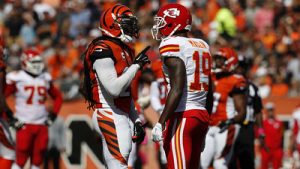 The Cincinnati Bengals’ recent success has been amazing. The team was a game out of first in the AFC North a month ago, but going 3-2, including winning their last two, has put them in first place, and the No. 3 seed in the playoffs.

That standing could be in jeopardy this Sunday, when the Bengals host the Kansas City Chiefs. Pat Mahomes & Friends have had an even more impressive turnaround. Two months ago, the Chiefs were tied for last place in the AFC West. But they rattled off eight consecutive victories to launch into first place; they currently hold the No. 1 seed.

Though this game means more to Cincinnati than it does to KC, the Chiefs are playing so well right now that it’s hard to fade them. The line opened at four and moved to 5.5 points in their favor, and even that seems too low.

Another reason to back the Chiefs is All-Pro tight end Travis Kelce has returned to the team, coming off the Covid-19 list.

At Resorts Sportsbook, you deserve a winning score. That’s why you get a percentage of cash back on monthly sports losses up to $10,000. 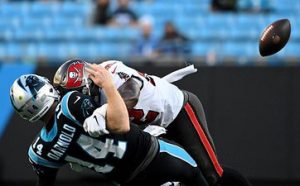 In Week 17, four games feature spreads of 10 points or more. They are:

Of the four favorites, only the Buccaneers and Bills have been double-digit favorites this season. Tampa Bay is 6-1 against the spread when laying 10 or more points, while Buffalo is 3-1-1.

Meanwhile, the four underdogs were all handed 10 or more points earlier this season. The Jaguars have the best record ATS at 2-0, while the Falcons are the worst at 0-2. The Jets are 2-3 and the Texans are 4-4.

So, who’s your best bet this Sunday? It’s a tough call, and laying 10 or more points in an NFL game is always nerve-wracking, but we choose Tampa Bay. They have a winning record in this situation, while their opponent has a losing one. 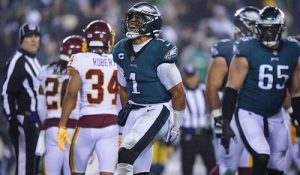 While the top half of the NFL playoffs are pretty much set, there’s plenty of drama remaining for the bubble teams.

The Miami Dolphins and Philadelphia Eagles currently hold the last spots in their respective conferences, but that grip is tenuous. There are three teams in the AFC with an identical record as the 8-7 Dolphins: the Los Angeles Chargers, the Las Vegas Raiders and the Baltimore Ravens.

In the NFC, the Eagles hold a one-game lead over the Minnesota Vikings, Atlanta Falcons and New Orleans Saints.

Philadelphia can clinch the final spot this weekend if they defeat the Washington Football Team, and the Vikings and Saints lose. The Eagles are favored by 3.5 points on the road. That appears viable, as does a Vikings loss to the Green Bay Packers, who are seven-point favorites. The Saints, who are favored by 7.5 points over the Carolina Panthers at home, seem less likely to lose.

In the AFC, the Dolphins could be out of the seventh spot after Sunday. They travel to face the Tennessee Titans, who are 3.5-point favorites. The Raiders are also on the road, facing the Indianapolis Colts, but caught a break when it was revealed that Colts starting quarterback Carson Wentz was put on the Covid-19 list. The line has dropped from 7.5 to 6.5 in favor of Indy.

The Ravens and Chargers both have home games. The Chargers are 5.5-point favorites over the Denver Broncos, while the Ravens are +3.5 against the Los Angeles Rams.

Football fans, join the family at BetRivers and your first deposit will be matched dollar for dollar up to $250.