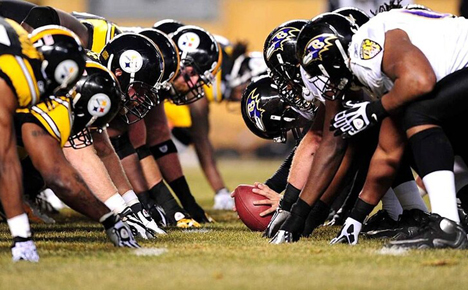 On the road to the Super Bowl, several teams are fighting for three remaining playoff spots. Let’s size up Week 18 of the NFL season.

Eleven of 14 NFL playoff spots have been decided as we head into the last week of the regular season. Of three postseason openings, seven teams still have a chance to play beyond this Sunday.

In the AFC, five teams are vying for two spots, with the Indianapolis Colts and the Los Angeles Chargers holding an edge over the Las Vegas Raiders, Baltimore Ravens and Pittsburgh Steelers.

Over in the NFC, two teams are going after a lone remaining playoff spot. In that conference, the San Francisco 49ers have the advantage over the New Orleans Saints. If the 49ers defeat the Rams on Sunday, they get the final spot. If they lose and the Saints defeat the Atlanta Falcons, New Orleans will play in the postseason. 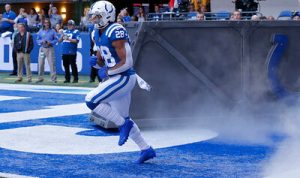 The Indianapolis Colts can punch their ticket to the postseason by defeating one of the worst teams in the league. They travel to Florida on Sunday to face the 2-14 Jacksonville Jaguars. The Colts are 15.5-point favorites at Caesars Sportsbook.

If the Jaguars lose, they will be guaranteed the first pick in April’s NFL Draft. I’m not saying they’re going to tank this game, but they probably aren’t going to be super-motivated.

The question seems to be how much Jacksonville will lose by. The team has been a double-digit dog four times this season, and covered twice. Last week, the Jags were a 17-point underdog to the New England Patriots, and lost 50-10. Losing by more than two touchdowns certainly seems possible.

Get a 100% First Bet Match when you sign up to play at Caesars Sportsbook. Whether you win or lose, your first bet is matched up to $1,001. 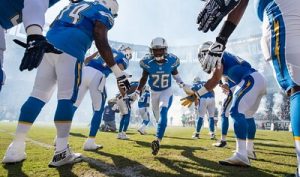 The Chargers are 2.5-point favorites, despite being the away team. These two AFC West rivals met the first week of October, and Los Angeles won 28-14 as a three-point favorite.

Beating a rival twice in one season is always tough. It’s made tougher for Los Angeles because it’s facing a hot Raiders team. Don’t be shocked if Las Vegas wins the rematch. 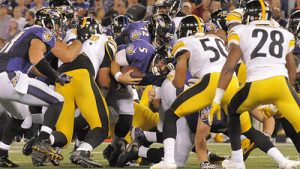 Two AFC North teams that have an outside chance of making the playoffs are the Pittsburgh Steelers and Baltimore Ravens. The two face each other Sunday at Baltimore. The Ravens are favored by four points at BetRivers.

Baltimore gets in if it beats Pittsburgh and the Chargers, Miami Dolphins and Colts all lose.

The Steelers, who defeated the Browns Monday night to stay alive, get in if they win and the Colts lose.

The Steelers and Ravens met a month ago and the Steelers won, 20-19. Both teams will be motivated, and the Ravens could be eliminated before the game begins. Still, the team will want to play spoiler to a division rival.

Get a 20% NFL Parlay Profit Boost at BetRivers. In the runup to the Super Bowl, log in every Sunday during NFL season to get the boost.

The San Francisco 49ers were tabbed as a potential Super Bowl team before the season began. Then the wheels came off as they lost five of six early in the season. They righted the ship a bit, but still need to defeat NFC West rival the Los Angeles Rams if they’re going to last into the postseason.

Beating the Rams might be too much to ask of the 49ers. They lost starting quarterback Jimmy Garoppolo to a season-ending injury, and now have to rely on rookie Trey Lance. But Lance passed his first test, defeating the lowly Houston Texans last Sunday.

The 49ers shocked the Rams in Week 9, winning 31-10 as 3.5-point underdogs. They’re facing a different Los Angeles team this time around, however, as the Rams have won five in a row.

The line opened at 4.5 points, but moved to 5.5. The Rams are motivated to win this game, as it will clinch the NFC West for them and lock up the No. 2 seed. That should be enough for the Rams to win at home on Sunday.

The New Orleans Saints have a realistic chance to get into the playoffs. First, the 49ers have to lose to the Los Angeles Rams. Second, they need to defeat the Atlanta Falcons on the road.

Gamblers like the Saints’ chances. The game opened at 3.5 points in favor of New Orleans, but has since moved to 4.5.

Not that the Saints need any more incentive, but they’ll be looking to avenge a November 7 loss to Atlanta. With Atlanta already eliminated from the playoffs, the Falcons will try to play the spoilers, but should come up short against their NFC South rivals.

Claim your crown as BetMGM’s King of the Weekend. Take a free shot at picking Sunday’s highest-scoring NFL teams in the correct order for a chance at the $50,000 Grand Prize!