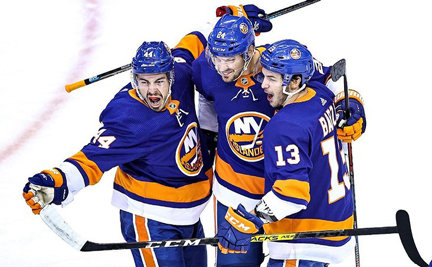 The NHL season reached its midpoint on Monday, and several storylines—both predictable and surprising—have developed since the start (like the winning NY Islanders!). So where do we go from here?

The NHL season reached its midpoint on Monday, and several storylines—both predictable and surprising—have developed since the start. Slow starts, fast ice, a Fleury of excitement…the NHL mid-season standings can be a window into the playoff picture.

How ’Bout Those Islanders?

The biggest stunner so far this season: the New York Islanders. The team was picked to get into the playoffs, but no one had them winning the East Division, where the Philadelphia Flyers, Pittsburgh Penguins and Boston Bruins were expected to slug it out for top honors.

But the Islanders have shown they’re the team to beat in the East. As of Monday, New York had the most points in the NHL. And with a 3-2 shootout victory over the New Jersey Devils on Sunday, the team had racked up nine straight.

Head Coach Barry Trotz came to the Islanders when he wasn’t re-signed by the Washington Capitals after winning the Stanley Cup in 2018. He’s led the team to the playoffs the last two years. He told reporters his coaching philosophy is simple.

“Play for each other, that’s No. 1,” Trotz said. “Not every player is the same, and I understand that. And I look at coaching … as a partnership with the players. We’re in a partnership to win hockey games.”

The Islanders’ odds to win the East Division have shortened since January. They opened as +650 to win the division, but are now the favorites at +200.

Islanders Captain Anders Lee is out for the rest of the season. He’ll go in for surgery to repair a torn ACL sustained during a collision on Sunday with New Jersey Devils forward Pavel Zacha.

Earn rewards for every wager at PointsBet.com. That’s 1 Rewards point for Every $5 Fixed-Odds Bet, $1 Parlay Bet, and for every dollar won or lost with PointsBetting. 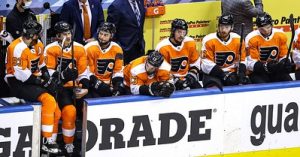 The Flyers, meanwhile, have been a disappointment so far. At PointsBet, the team was the second pick at +350 to win the East Division. Instead, the Flyers are struggling just to get a playoff spot. They’re currently in fifth place, three points behind Boston for the last postseason spot.

But Philly forward Claude Giroux isn’t worried. He told reporters on Saturday he’s confident the team will make the playoffs. 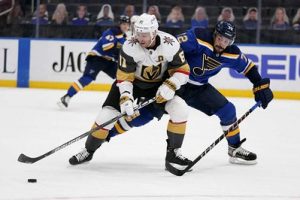 When the realignment was announced in December, the West Division was expected to be the strongest. The Colorado Avalanche (+650) and the Vegas Golden Knights (+750) had two of the best three odds to win the Stanley Cup.

At this mid-season point, the Golden Knights are the best team in that division, but they’re only first by two points, and only four points separate them from the fourth-place St. Louis Blues. The Minnesota Wild are second, while Colorado’s a point behind in third.

Vegas is still second with the best odds to win the Stanley Cup. They’re at +700 at BetMGM, along with the Toronto Maple Leafs. the Tampa Bay Lightning are the favorites at +600. Colorado is the third pick at +800.

The Golden Knights are just 6-5 against the other top three teams, but they’re the only team of the four with a winning record. Colorado is 5-5, St. Louis 2-3, and Minnesota 4-4.

How’s a $500 risk-free bet sound? Register a new account at WilliamHill.com. If you lose your first bet, you’ll earn a Free Bet in equal value up to $500! 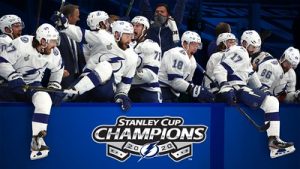 While it’s difficult to repeat as champion in any sport, the Tampa Bay Lightning are looking like they could pull off the feat. The defending Stanley Cup champions are two points behind Central Division leaders the Florida Panthers, and one point behind the Carolina Hurricanes.

Tampa Bay is the current favorite to hoist Lord Stanley’s Cup at +600 at BetMGM and William Hill.

One area of concern for the Lightning could be defense. The team might need another quality blueliner if they’re going to reach the finals. And that’ll be difficult, since they’re nearly at the max in regards to salary cap space.

“If you look at the standings, you look at wins and losses, goals for, goals against, our special teams, the only conclusion you can draw is that we’ve had a really good first half of the season,” BriseBois said. 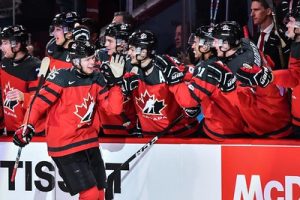 The rest of the division seems to be in chaos. Both the Montreal Canadiens and Calgary Flames have fired their head coaches.

The Winnipeg Jets and Edmonton Oilers are tied for second in the division, four points behind the Maple Leafs. Both seem like longshots to win the Cup. The Jets are +2200, while the Oilers are +2500.

Earn 40% more on parlays at BetMGM.com! Just opt in and place a 4-leg to 7-leg parlay on any combination of sports or sporting events.

Remember, there’s still a lot of hockey left to be played. With the NHL mid-season standings showing some clear favorites, it’s time to hit the books and place your bets.