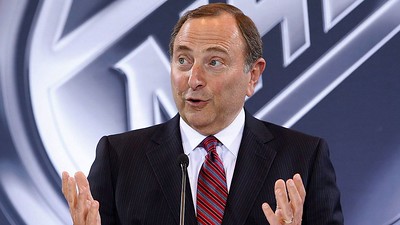 An announcement by NHL Commissioner Gary Bettman (l.) that a plan was developed to resume play moved betting lines for teams in the playoff hunt.

The NHL has yet to resume play after a shutdown in March due to the coronavirus pandemic. NHL Commissioner Gary Bettman unveiled the league’s plan on May 26.

Just talking about a return to action plan is enough to change the betting lines, according to TheLines.com, which tracks odds in the U.S.

But the Boston Bruins and Tampa Bay Lightning remain the favorites to win the Stanley Cup.

While no date has yet emerged, when play resumes, the new format for the playoffs will include 24 teams, a round of eight play-in series, and first-round byes for the top four seeds in each conference. After the announcement, Boston reopened at +650 on DraftKings—paying $650 profit for every $100 bet—and +600 on FanDuel. The Bruins were +550 on DraftKings and +650 on FanDuel when the season was postponed in March. DraftKings moved Tampa Bay to +700 from +750, and FanDuel’s line moved to +600 from +700.

“With first-round byes, the new format gives a distinct advantage to the top four seeds in both conferences and the updated lines reflect that,” said Brett Collson, betting analyst at TheLines.com. “With so much pent-up demand for sports betting, we expect relatively heavy betting in regulated sports betting markets across the U.S. So the betting lines should continue to move before the first puck is dropped.”

PGA’s Back, and Fa