HomeThe ShuffleNHL Stanley Cup: Winnipeg Jets Have Something to Prove

NHL Stanley Cup: Winnipeg Jets Have Something to Prove 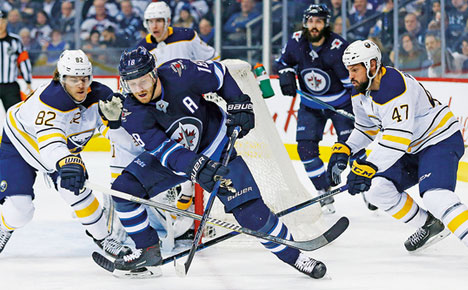 No coach? No captain? No problem for the Winnipeg Jets, a great rebound candidate for the second half of the NHL season. The Boston Bruins should rise, too.

Seeing Paul Maurice step down as the head coach of the Winnipeg Jets not even halfway through the season was a complete shocker, something I didn’t see coming at all.

The team learned from its disastrous 2020 season, where the defense was terrible and the drama was high. This season, they started out as a middle-of-the-road team, but having their head coach quit on them might fire the roster up (they’re also out their captain, Blake Wheeler, out for weeks due to injury).

The Jets are seven points back of the division-leading Minnesota Wild, who are an interesting team themselves since they have virtually no star power. Meanwhile, the Nashville Predators are overachieving big-time right now with 39 points, while the St. Louis Blues and Colorado Avalanche continue to win (although the Avs have been slightly disappointing this season).

But the Winnipeg Jets have what it takes at the right positions to win a Stanley Cup. First, they have a roster full of offensive talent, starting with Kyle Connor, who’s been fantastic this season for the Jets. Connor is tied for fifth in goals with 18 this season already, and has racked up 32 points in 30 games.

Betting on the Winnipeg Jets? Do it like a pro. Get today’s picks for the NHL and all sporting events with a Day Pass at BetQL!

Why Winnipeg Has the Right Stuff 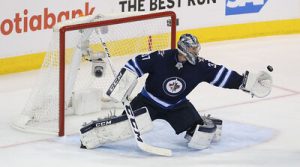 In another plus, Mark Scheifele is back. And Scheifele does a lot more for this team than people are seeing in the stat category this year. His suspension last postseason helped do the Jets in against a red-hot Montreal Canadiens team. Young stars Nikolaj Ehlers and Pierre-Luc Dubois have supported Connor well and contributed big in their own way. Ehlers has 11 goals and 24 points, while Dubois has 14 goals and 25 points.

And let’s not forget Connor Hellebuyck in the net. Perhaps the best goaltender in the league, Hellebuyck has faced the most high-danger chances of any goalie over the past three seasons and still manages to be in the Vezina conversation every single year.

The Winnipeg Jets’ defense has been much improved from its horrendous showing in 2020, and part of that can be attributed to acquiring Nate Schmidt from Vancouver. Clearly, this is a true blue-line star, a minutes-eater who can play all situations as one of the best defenders in the game, and has 17 points in 29 games.

Winnipeg Jets Can Make a Second Half Push 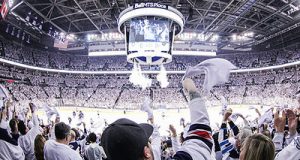 Winnipeg is in a tough division, to be sure, but there’s no reason to think they can’t come back with a push in the second half. As I mentioned above, they aren’t that far out of first place and are right there with the Wild, Blues, Predators, Avalanche and Dallas Stars, who are all fighting for the division crown.

While Colorado is great offensively, its goaltending is very questionable. And though St. Louis has the pieces to win the division, I’m not sure it has the depth to win a championship again. Meanwhile, Minnesota is still a mystery to me, as they have no real stars, yet score at the third-highest rate in the league. Nashville is overachieving, and I could see them falling a bit.

It’ll be hard, but Winnipeg has the pieces to do it. It also has the Canada Life Centre, which is among the most difficult buildings to play in as a road team. Like Penn State, the Jets have a white-out for home games, and that can be very intimidating for opposing teams. Plus, I think Maurice essentially quitting on them will light a fire in their stomachs.

At 60-1, what do you have to lose sprinkling a bit of pizza money on this to win a ton of cash?

For a chance at bigger payoffs, get Parlay Plus at BetMGM. Opt in and place a parlay of at least four qualifying selections; Parlay Plus can boost your payout by up to 40%.

In the East, Bruins Could See a Strong Second Half 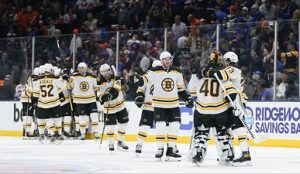 This is easily my favorite team to have a strong second half. The Boston Bruins are a talented team, but they’ll be even better when Tukka Rask comes back and is in the net once again for Boston. Rask is a true difference-maker at goalie, a guy that can carry a team on any given night, and someone the Bruins will be ecstatic to have back.

The Detroit Red Wings have had a great season so far for the team that they have, and you have to give them some credit for what they’re doing in their rebuild. However, the Red Wings are just three points ahead of Boston, with five more games played.

The Bruins are better than they showed early on. Although they have the NHL’s worst team shooting percentage, that’s going to get better as the season progresses.

I fully expect the Bruins to overtake Detroit at some point soon; they’re just the better team, and when everything is said and done, should be competing for the Atlantic Division with the Tampa Bay Lightning, Toronto Maple Leafs and Florida Panthers.

Register a new Caesars Sportsbook account and your first real money wager will be matched with a Free Bet up to $1,001 – win or lose! Minimum odds -200.

Keep it fun by keeping it safe. Know how to avoid problem gambling by following three simple tips. Click here for details.

Golf Bets a Boon for