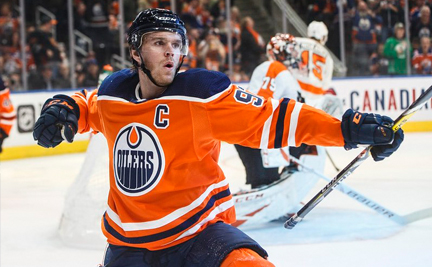 With the NHL season up and running, who are the leagues’ statistical leaders, and how can they turn success on the stat lines to success on the ice? Let’s dive into the NHL stat leaders at this point in our abbreviated season.

With about a month and a half of hockey already behind us, it’s time to look at who started strong and who’s going to keep up the pace. 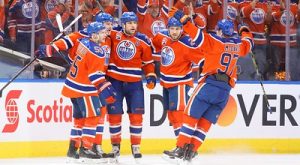 Connor McDavid is probably the closest thing to a sure bet that you’re going to find this season. If you already have McDavid to win the Art Ross Trophy, you’re sitting pretty. If not, load up now, because the Edmonton Oilers captain is firing on all cylinders, and should run away with this honor as the season progresses. When it comes to NHL stat leaders, 25 of this guy’s 37 points so far have come from assists—a statistic where he clearly leads the league.

As long as McDavid finds open teammates at such a high rate, the goals will pour in, making it his trophy to lose. It’s worth noting that second-place Leon Draisaitl also wears the same uniform. If these two can keep up this level of production, watch out for Edmonton this year.

Eighteen goals in 20 games is almost funny—a stat you might expect to see on NHL 21. But barely a month into the season, Auston Matthews of the Toronto Maple Leafs finds himself in this category, with a six-goal lead over second-place McDavid. While this pace isn’t sustainable for the young star forward, his success is clearly not a fluke, and his team is playing tremendous hockey.

Matthews has always been a prolific goal scorer, and now he’s really coming into his own. If he can keep growing at this rate, look for plenty of trophies in his future. Expect Matthews to hold this lead for the bulk of the 2021 season. 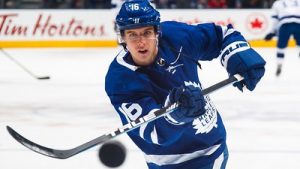 While Matthews has poured in a ton of goals in the early part of the season, line mate Mitchell Marner is arguably the biggest reason why Toronto currently has the most points in the NHL. Marner’s tied for 10th place in the NHL in goals (9), second in assists (21), and tied for second in points (30) so far this season. And while these are jaw-dropping numbers from the 23-year old, none may be as impressive as the +16 rating Marner has been able to rack up so far.

The Leafs have tremendous success when this young winger is on the ice, as he’s averaging almost a +1 rating per game he’s played to date. Matthews and Marner are honestly frightening on the Toronto lead line, and don’t look ready to slow down any time soon. Put your chips all in on the Leafs.

Ever since being drafted by the expansion Vegas Golden Knights team a few years ago, Marc-Andre Fleury has played like the best goalie in the league. He led his team to the Stanley Cup Finals in their first season, and has enjoyed great team success ever since.

This year, the 36-year old isn’t showing signs of aging, allowing an average of just 1.55 goals per game and saving 94.218% of shots thrown his way. This has translated into a first-place division standing for his team thus far, something they have all become quite familiar with. Don’t expect Fleury to fall off this trend this year or any time soon. This man appears to be truly timeless.

Welcome to GoldenNuggetCasino.com, where new sports bettors are eligible for a $100 Risk-Free Bet on their first settled bet. Only straight wagers (single bets) and live bets (in-play bets) qualify. 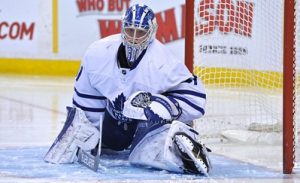 I know, I know—another Toronto player, Frederik Andersen. This statistical lead might not be as indicative of individual success as the other categories, because of how elite Andersen’s offense has been so far this season. The Maple Leaf goaltender has played well but not incredibly well, and he’s been a beneficiary of the stellar offensive output for sure.

Second-place Andrei Vasilevskiy of the Tampa Bay Lightning is probably a lot more deserving of his ranking: he’s Top 5 in both goals against average and save percentage, more like Fleury. Vasilevskiy was also more of a factor in his team’s solid start, as the Lightning defend its title.

Of the two, put much more stock into Vasilevskiy personally. But Andersen could continue to play well enough to match his offense’s production. Either way, both Toronto and Tampa Bay are teams to watch and place your futures bets on.

In summary, we’re seeing tremendous individual play from some of hockey’s brightest young stars this season. Focus your attention on these players/teams, and good luck!

Earn up to 40% more on your parlays at BorgataOnline.com. Just place a 4-7 leg parlay on any combination of sports or events. If it wins, you’ll receive the additional bonus payout within 24 hours.

Betting the NHL? See how league rivalries will enliven this season here at iGamingPlayer.