HomeThe ShuffleNHL: Why the Vegas Golden Knights Are A Great Bet

NHL: Why the Vegas Golden Knights Are A Great Bet 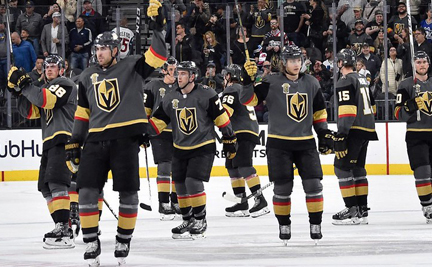 The Vegas Golden Knights are the favorites to win the Stanley Cup. Here’s why that would be an historic event and heartwarming at the same time.

Ten days after the horrific shooting of October 1, 2017 in Las Vegas, the Vegas Golden Knights skated out for their inaugural game. We always knew hockey in Las Vegas was going to be something different, but their first game told us it would be something special as well.

Before the first puck dropped, the Knights honored the victims and recognized the first responders in a way that didn’t leave a dry eye in the house. Emotions were still raw, and the pre-game ceremony barely mentioned it was the first official NHL game played in the new T-Mobile Arena, focusing instead on healing and unity.

That wouldn’t be the last time VGK did something amazing in the first season. Pre-game activities in most NHL arenas are usually pretty boring, predictable affairs. Even after opening night, VGK pre-game ceremonies were a show, like you might expect to see in Las Vegas—and each one is different. Before one game that season, the lights, sounds and drums brought the crowd to a fever pitch before the “Knight” came out, retrieved the sword in the stone, and proceeded to “slay” his opponent. A great bit of theater, and that was just the start.

It helped that the team was good—real good. Team after team rolled into Vegas expecting to push around this group of castoffs on an expansion team, only to leave licking their wounds. VGK proved they were for real—up until the finals, when they were beaten by another team of destiny, the Washington Capitals, who won the first Stanley Cup in their history.

In their second season, VGK was just as good, advancing to the semi-finals in the Western Conference only to be waylaid by one of the worst calls in NHL history against the San Jose Sharks in a winner-take-all Game 7.

So VGK regrouped and entered the 2020 season with high expectations. When things didn’t start off so well, the team stunningly fired its only coach, Gerard Gallant, who had earned a place in the hearts of fans. To make matters worse, they hired Peter DeBoer, the recently exited Sharks coach—the very guy who kicked the Knights out of the 2019 playoffs.

Then Covid-19 hit, and everything ground to a halt. While 90 percent of the season had been completed prior to the lockdown, it was unclear whether it would ever restart. Once it became obvious that fans wouldn’t be part of the equation, the NHL opted to go to the “bubble,” and it’s been more successful than any other sport. Almost 5,000 tests have been administered with no positives inside the bubbles in Edmonton and Toronto.

Since then, the Golden Knights have roared back, once again reaching the semi-finals of the Western Conference, this time against the Vancouver Canucks. Now they’re the prohibitive favorite to win the Stanley Cup at +230. The second team in line to win? The surging Dallas Stars, a team VGK easily dispatched in the round-robin series leading up to the actual playoffs. 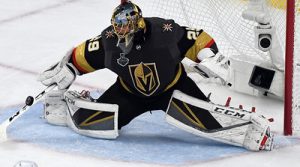 But the surge hasn’t been without controversy. Longtime VGK goalie Marc-Andre Fleury has been riding the bench in favor of another late season acquisition, Robin Lehner. Fan-favorite Fleury has been respectful, but his agent has threatened to demand a trade. And with Lehner peppered in Game 2 versus the Canucks, Fleury might be back in net for Game 3.

Yes, the Vegas Golden Knights have won the hearts of Las Vegas and a large portion of the hockey world as well. Who doesn’t like the story of the underdog fighting against all odds, even when they become the favorite?

Your first sports bet at ResortsCasino.com will be matched up to $250. Just sign up and make a deposit to cash in.