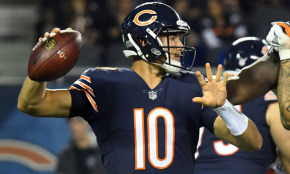 Here are PlaySugarHouse.com’s betting angles from each game for the Thanksgiving NFL slate.

Bears QB Mitchell Trubisky — The game opened at Bears -4 but when it was revealed that Trubisky has a sore shoulder and isn’t practicing or could even miss the game, the line moved to -3.5 +100 on PlaySugarHouse.com. On Wednesday, ESPN’s Adam Schefter reported that Mitchell Trubisky still has soreness in his shoulder and is unlikely to play. The line immediately moved to Bears -2.5. Market observers can note that the estimated drop off between Trubisky and his backup Chase Daniel is around a point and a half. While he’s been in the league for eight years, Daniel has only made two starts, going 1-1. He’s considered a competent backup and is familiar with Matt Nagy’s offensive scheme from their time spent together on the Chiefs.

Redskins QB Colt McCoy — McCoy is starting for Alex Smith. McCoy is 7-18 in his career as a starter and is a clear downgrade from Smith. The Cowboys are now 7.5 point home favorites. With Alex Smith in the lineup this spread would have been at least a point and a half closer to the Redskins. Washington is one of the best Against the Spread (ATS) teams on the season at 7-3, but bettors will have to wonder if that will carry over with a new QB.

Saints / Falcons — This is a matchup of the best ATS team vs. the worst on the season. The Saints are 8-2 ATS and the Falcons are 3-7 ATS. Given how hot the Saints are, market observers should anticipate the majority of the betting interest being on them this week. The 60 point total is the highest on the entire weekend by over four points.